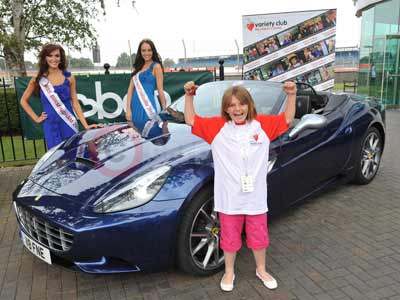 Ferrari North Europe has once again collaborated with the British Racing Drivers' Club and Silverstone Circuit to provide some of the nation's most deserving young people with a special experience.

The Variety Club, the Children's Charity and BEN, the automotive industry charity nominated 50 disabled, disadvantaged and seriously ill children who all had the opportunity to driven around Silverstone Circuit in a fleet of Ferrari California sports cars. The drivers included professional drivers and talented young members from the BRDC's 'SuperStars' scheme. Reigning BTCC champion Jason Plato also took to the wheel alongside Ferrari enthusiast and Pink Floyd drummer Nick Mason.

Other celebrities at the event included Dancing On Ice runner up Donal MacIntyre, sports presenter Steve Rider and, making her first appearance since being crown, Miss England Alize Lily Mounter.

The children, aged from seven upwards, travelled from across the country in order to attend the Ferrari California Experience, which included a 15 minute passenger ride whilst their families were provided with unique access to the BRDC Clubhouse which features images of racing cars and memorabilia which relives Silverstone's history.

The children also had the chance to break a record of their own as they competed in a race organised by F1 in Schools. Hot Wheels also provided a giant race track for the younger children as well as children's entertainers Smartie Artie, whilst the older ones had a chance to play on the latest PS3 games.

Before they left for home, the children were all presented with a USB stick which contained footage from their own personal ride which was captured using an on-board camera.

10-year-old Tom Blakemore from Halesowen in the West Midlands was diagnosed with an inoperable tumour in January 2010 but, thanks to pioneering treatment he received in the US, is now cancer-free. "Tom was actually invited last year but for obvious reasons couldn't make it," said his mother Jayne. "The fact that 18 months later he is here to enjoy this brilliant event means the world to us. The look on the faces of Tom and the other children as they got out of their Ferrari is something I will remember for a long time."

Commented Matteo Torre, Regional Manager of Ferrari North Europe: "This year's California Experience has exceeded even last year's inaugural event, consolidating its position as an integral part of FNE's CSR activity and one that we will build on year after year. I would like to publically thank all the partners whose generous donation of time and resources has helped create an unforgettable day for a group of extraordinary young people."

Ferrari California Images may not be UK specification cars. Colours and exterior and/or interior elements may differ from actual models.