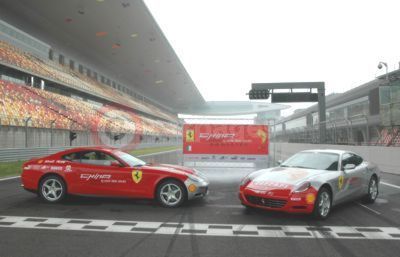 Shanghai, 6 July 2005 - Ferrari has had a natural association with the race track since the first Prancing Horse competed in 1947 and since then has been inextricably linked with the leading circuits across the world. It is, however, slightly more unusual to associate modern-day Ferrari with the kind of adventure associated with Mille Miglia and Carrera Panamericana-style endurance events.

Those legendary historical races demonstrated the versatility and strength of the cars of the day, but they were also much more dangerous and less well-tested than today’s cars. That type of race no longer exists and to put a sophisticated, powerful car like the Ferrari 612 Scaglietti to the test nowadays requires at least 10 to 15,000 miles of very tough terrain.

In 1997 a Ferrari F355 completed a round the world trip taking in all five continents. The car was driven by 147 different journalists from the various countries it crossed and each one left his signature on the car’s bodywork. 1997 was also Ferrari’s 50th anniversary and the World Tour, as it was known, was staged to tell the world how very much alive and successful the company was and also to demonstrate the reliability of a model that would prove of huge strategic importance in Ferrari’s development. The adventure proved an extraordinary success with the F355 leaving New York on 18 March and returning there to finish the tour after 75 days, quite literally, on the road.

It now gives Ferrari great pleasure to announce the launch of another similar adventure. This time, however, two 612 Scagliettis will leave Shanghai on 29 August 2005 for a grand tour of China, driven by Chinese and international journalists. No other constructor has ever undertaken such a daunting task. The route covers an enormous range of very different terrains and challenges. The cars will endure extremes of cold and heat, incredibly tough road conditions and environmental obstacles of all kinds.

The 612 Scagliettis will first head north and then east toward Manchuria. After this they will drive south-west to Beijing and then along the Great Wall as far as Lanzhou. From there they will cover over 3,000 km at an altitude of more than 4,000 metres as far as Lhasa in Tibet before heading back west through the Gobi Desert to the ancient city of Kashi, site of Marco Polo’s famous silk market. After a further dash through the desert, the two 612 Scagliettis will drive on to Urumqi and then down through the tropical part of the country to Guangzhou, which is more familiar to us as Canton. From there they will continue on through the most modern and western part of China back to Shanghai after a round trip of 15,000 miles. If all goes according to plan, the two 612 Scagliettis should complete their tour of China in 45 days.

The Tour has received the valued support of the Chinese authorities as well as logistical support from Fiat China. It is also being staged in partnership with some of Ferrari’s most faithful sponsors, including Shell (fuels and lubricants with specialist support in the toughest areas), Puma (for crew clothing), Alcoa (technical partner and builder of the 612’s aluminium chassis), Pirelli (supplier of specialist tyres for the various terrains) and Saima Avandero (transportation of the cars, wheel rims and spares). We will also be joined by a Chinese partner, Xin Yu Watch & Clock, the leading distributor of Swiss timepieces in China. Assistance and spares will be provided by four vehicles: two Fiat cars and two specially equipped Iveco trucks.

A total of 15 international journalists and 15 Chinese journalists will drive the route at different times.

The Tour starts on 29 August 2005 from Shanghai and in the main territories to be crossed the expedition members will meet with local authorities and present them with a Prancing Horse trophy as a symbolic gift.