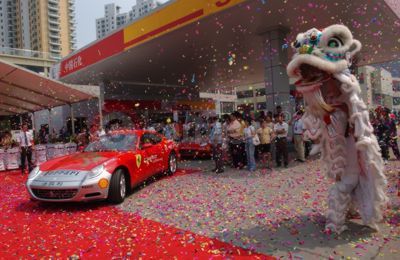 The first ever tour of China by a car manufacturer, the "Ferrari 15,000 Red Miles", got off to an exciting start in Shanghai this morning. The Tour will see two Ferrari 612 Scagliettis, driven by teams of Chinese and international journalists, cross the length and breadth of this vast country.

The "Ferrari 15,000 Red Miles" Tour is enormously symbolic on several levels. Firstly, China itself looks set to epitomise the 21st century better than any other nation. Secondly, its economic and industrial growth also make it hugely important for the world car industry and it is significant that cars by the world’s most exclusive and sought after marque will be the first to explore its immensity.

It is equally significant, however, that it is an Italian brand that is introducing journalists to the incredible diverseness of a country that combines past, present, tradition and future.

The Tour also celebrates "2006 Italian Year in China" while the car windshields will also display the emblem of the upcoming 2006 Winter Olympics in Torino, Italy.

The "Ferrari 15,000 Red Miles" has been made possible thanks to the kind support of Fiat China and the Chinese State Tourist Authority. The strong position of the Fiat Group in China, in fact, was in great part responsible for the gaining of official approval for this historic Tour.

The two Ferrari 612 Scagliettis will be supported by a team of maintenance staff and trucks supplied IVECO. Two Fiat cars will accompany the team also. After setting off from Shanghai this morning they will pass through Nanjing and then move towards East, to Manchuria. At Shenyang the team will turn South to Beijing then travel right across the country to Golmud in Qinghai province before driving across Tibet to Lhasa. After travelling over 4,000 kilometres at an altitude of 4,000 metres, the team will continue along the edge of the Gobi Desert and head to Xingjian province and Kashi, the world’s most land-locked city and home to a famous silk market since the times of Marco Polo.

After leaving Kashi the China Tour team will once again cross the Desert, this time heading South towards Urumqi and the start of the return leg. The group will follow the Great Wall of China then make a right turn and head off to the tropical belt and as far South as Guangzhou. On the 30th of October, the team finally returns to Shanghai. A total of about 40 journalists from China and abroad will take part in driving throughout the entire journey.

This morning’s departure ceremony was a spectacular event held at the Ferrari showrooms on Tomorrow Square. Media representatives and Ferrari clients gathered to watch the drum performance and symbolic tank filling ceremony held by Shell China. Afterwards, at People’s Square, Ferrari presented Mr. Wei Hu (the deputy director of the standing committee of the Shanghai People’s Congress) with a symbol of friendship, the Ferrari Trophy.

To date Ferrari has ten dealers in China’s leading cities and is attracting a growing number of first-time Prancing Horse owners. Ferrari expects to sell up to 80 vehicles in 2005, but China look set to become its fifth or sixth most important market worldwide within the next couple of years.

Organising the "Ferrari 15,000 Red Miles" proved particularly complex. Apart from Fiat, IVECO, and Shell, our other sponsors on the Tour include: Pirelli which is supplying specialist tyres for the difficult road conditions; Puma; Alcoa which manufactures the 612 Scaglietti’s aluminium underbody; transport agent Saima Avandero; and Xinyu Watches, China's leading watchmaker.