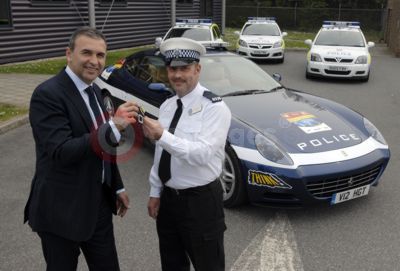 Ferrari has created a special version of the flagship V12 four-seater 612 Scaglietti liveried in police colours to be used when Ferrari’s 60th Anniversary relay starts the UK leg on 18th April.

The relay is part of the celebrations marking the 60th anniversary of when the first Ferrari car was produced in 1947 by Enzo Ferrari. The relay began on 29 January 2007 in Abu Dhabi and has already visited the Middle East, China, Japan, North America, Spain, Portugal and Holland and will involve over 10,000 Ferrari owners and their cars of all ages. The cars are symbolic ‘bearers’ of a specially commissioned relay baton adorned with 60 badges symbolising the most extraordinary events in the Marque’s 60- year history which is travelling across the world. British fans can follow the tour on-line by visiting www.ferrari60relay.co.uk with daily updates and pictures.

Ferrari has provided a dedicated 612 Scaglietti HGTS liveried in police colours, which will be driven by police officers at the front of the UK tour throughout the 1500 miles from Belfast to London. All of the police officers driving the 612 are volunteers from five forces across the UK, and are driving in their free time (not as part of their normal duty) to support the tour.

Representatives from police forces across the UK will also visit the various handover and meeting points throughout the UK promoting the government backed ‘Think!’ campaign on road safety.

Massimo Fedeli, Managing Director of Ferrari GB said: ‘Ferrari is the world’s ultimate high performance luxury car but we are very focused on ensuring that clients enjoy that performance in a safe and responsible way. We offer driver training course for all customers through our Pilota programme, and also in the UK a track-driving experience called Fiorano Ferrari.

‘Our 60th anniversary tour is the perfect opportunity to provide this special 612 Scaglietti HGTS for the police service of England, Ireland and Wales to drive. This reinforces Ferrari’s commitment to responsible driving and promoting road safety. The 612 Scaglietti HGTS is the ideal car for this activity with four full-seats and the Ferrari Grand Touring heritage as the flagship of our range.’

PC Paul Atkin, ACPO Liaison Officer for Roads Policing said: ‘Ferrari have worked closely with ACPO to ensure the relay has been organised responsibly and we are very impressed with their approach to the issue of road safety and their considerations of the effect the relay would have on other road users. The tour provides a perfect platform for the police forces across the UK to promote the ‘Think!’ campaign.’

The car provided to the British Police for the tour is in Blu Tour de France with a Beige interior. The car features the HGTS (Handling GTS package) and also has Daytona style seats, personalised stitching and leather details, yellow rev counter, yellow brake callipers and Scuderia Ferrari shields. The price of the car as featured is £200,411 including four year warranty. Ferrari GB would also like to thank Woodway Engineering for their assistance with the emergency lighting bar.

The Association of Chief Police Officers

One of the Ferrari 612 Scaglietti participating in the Ferrari 60 Relay UK Tour appears in police ‘livery’ and will be driven by members of the police from the various regional police forces through which the tour passes.

The Association of Chief Police Officers have worked with Ferrari to ensure that their vehicle is liveried in a purely generic way. Officers have also been consulted and advised on the route that the 60 Relay will take to ensure minimal disruption to other road users during the course of the event.

The police service of England, Wales and Northern Ireland is pleased to be represented during Ferrari's relay tour. As the tour passes through a number of police force areas various road safety messages will be highlighted including the danger and enforcement implications of using a mobile phone whilst driving.

THINK! - mobile phones: Switch off before you drive off

The police are also supporting the Ferrari 60 Relay to remind drivers of new legislation which was introduced on 27 February 2007 regarding the dangers posed by using mobile phones while driving.

The penalty for being caught driving while using a mobile phone is now £60 and carries 3 points. If the case goes to court, you could risk a maximum fine of £1,000, which rises to £2,500 for the driver of a bus, coach, or heavy goods vehicle. A driver can also be prosecuted for using a hands-free device if you are not in proper control of your vehicle when using the device.

Further details of the THINK! - mobile phones: Switch off before you drive off campaign can be found on the DTI’s website: www.thinkroadsafety.gov.uk