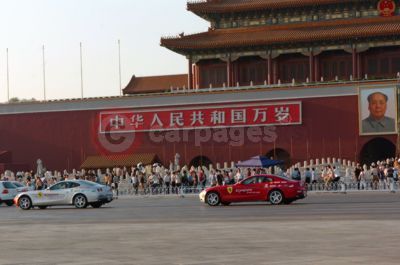 It was a young businessman, Guo Bao Tian, to scoop the Ferrari 612 Scaglietti that was auctioned for 3,400,000 RMB. The car is taking part in the tour of China and the proceeds from the sale will be donated to the Soong Ching Ling Foundation that cares for Chinese children.

The car, currently taking part in the ‘Ferrari 15,000 Red Miles’, will be delivered at the tour’s end in mid-November.

Vice-president of the Foundation, Yu Guilin, recalled the bond of friendship that exists between the two countries on the eve of the Italian year in China. 3,500 of the planned 20,000 kilometres have been covered so far. From Shanghai the two Scagliettis headed east towards Quindao and from there by ferry across the Yellow Sea to Manchuria. It will then be on to Beijing.

The charity auction took place at the Chinese National Museum in Tien An Men Square. Its Director and Vice-president of the Ministry of Culture, Pan Zhenzhou, received from Amedeo Felisa, Ferrari’s Vice-General Manager, a trophy that will be displayed to the public from today.

During his speech, Felisa underlined the company’s cultural and sporting values. He thanked the authorities and Chinese people for having granted permission for this extraordinary journey. Felisa also went on to mention the twinning of the 2006 Winter Olympics in Turin and the 2008 Games in Beijing.

A visit was also paid to the Italian Ambassador in Beijing, Gabriele Menegatti. He welcomed members of the expedition together with political figures and some of the Italian community here.

The tour will leave Beijing and head towards Lhasa, Tibet, on Thursday morning. At the wheel of the cars there will be a team of US journalists and a French one. The vehicles will be presented to Chinese clients tomorrow, September 7th, when the major new Show Room of Beijing will be inaugurated.