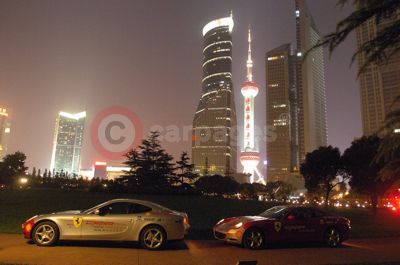 Ferrari’s 15,000 Red Miles Tour, an unprecedented adventure which has seen two 612 Scaglietti travel all over China, is concluding today in Shanghai, in front of Fiat Group's Vice President John Elkann and numerous Ferrari lovers and supporters. To mark the occasion, Shanghai's architectural symbol, the Oriental Pearl Tower, an amazing 468 metre high building, is illuminated in red to celebrate the end of the tour as well as the first year of Ferrari's presence in China.

Last year Ferrari received an important award: for the first time an Italian brand was given the title of "Renowned Brand" by the Chinese Office for Trade Marks. Honoured by this important tribute, President Luca di Montezemolo has declared: "I dreamt of Ferrari being in China since 1993 even though the restrictions on imports were enormous. Today the situation has changed and Ferrari now has its own trading organisation with complete customer support, and may as well aspire to turn China into one of the six leading world markets. Shanghai's tribute to Ferrari, after New York's Empire State Building was lit up in red last year, confirms once again Ferrari's capability of arousing passion all over the world."

The 15,000 Red Miles Tour is a formidable challenge, never before undertaken by any automotive company: 51 Chinese and international journalists alternating at the steering wheel, more than 24,000 kilometres covered, 1,600 on very rough roads, 5,231 metres in height reached in Tibet, 45 five days travelling, 420 hours driving, up to 900 kilometres per day, 37 towns crossed; all this achieved with just two rims damaged due to the holes in the ground and two sets of snow tyres for the most impervious regions. No oil refills were needed. Notwithstanding the low quality of fuel in some areas, the often critical conditions of the roads and the astonishing heights reached, all this was realised by the two Scaglietti.

Extremes of climate, and difficult roads and environmental obstacles characterised this tour: starting in Shanghai, the expedition first headed north, then east towards Manchuria, and finally south-west to Beijing to drive alongside the Great Wall to Lanzhou.

After having crossed Tibet up to Lhasa, the two Scaglietti turned west through the Gobi desert and reached Kashi, the ancient town on the Silk Route described by Marco Polo and the most continental site on earth. Driving further across the desert, they reached Urumqi and then down through the tropical region to Guangzhou, better known as Canton. Here the route turned to the most Western and modern part of China with the conclusion today in Shanghai.

The expedition was welcomed enthusiastically in every single town, thus confirming Ferrari's following throughout the country. A plaque of the Prancing Horse, as a token of friendship, was offered to local authorities, while the team brought presents and educational material to the schools.

Ferrari has benefited from the precious support of Chinese Authorities and has availed itself of Fiat China's logistical assistance for the organisation of this journey, sponsored by some of its most faithful partners, such as Shell (fuel and lubricants, with specific assistance in the most difficult areas), Puma (for the team's clothing), Alcoa (technical partner and 612's aluminium chassis supplier), Pirelli (special tyres for the different stages of the tour) and Saima Avandero (cars and spare parts shipping). A Chinese partner as well took part in the enterprise, Xin Yu Watch & Clock, Swiss watches' main distributor in China. Two PowerDaily Iveco as a support and one Iveco 4x4 VM40.10 for technical assistance, tyre and spare parts transport and two Fiat Palio Weekend for video and photo shooting.

Ferrari has been present in China since 1993: initially with an importer in Hong Kong and, since last year, with a joint venture. Ferrari Maserati Cars International Trading, in which Ferrari and Maserati are the main shareholders, was set up in October 2004.

Ferrari Maserati Cars International Trading is the exclusive importer of Ferrari and Maserati cars in China, and is responsible for the marketing activities, sales to the dealer network, spare parts, accessories and technical support for both brands. Local personnel are directly trained by Italian Headquarters, in order to provide customers the best assistance, up to Ferrari and Maserati standards. The dealer network should be up and running by November in 10 major Chinese cities (Shanghai, Beijing, Guangzhou, Panyu, Shenzen, Hangzhou, Qingdao, Chengdu, Xiamen and Chongqing).

Looking at China's dynamic growth it is possible for Ferrari to foresee that this market may strongly develop in the near future; the current allocation of 90 Ferrari cars for 2005 may quickly rise in the next two or three years to make China one of the leading six markets for the Prancing Horse.