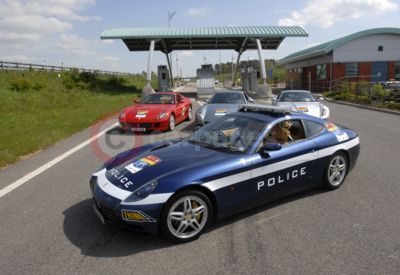 This year’s Goodwood Festival of Speed will feature a special homage to Ferrari’s 60th Anniversary, with a unique display of race and GT cars in the Stable Yard, adjacent to Goodwood House. The Festival of Speed is the most prestigious historic motorsport event of the year where visitors can experience over 100 years of automotive history in one place. This year Goodwood celebrates over 800 years of anniversaries, one of which is Ferrari’s 60th Anniversary.

Ferrari’s commemorative car display represents the evolution of the Prancing Horse from its debut in motor racing to today’s state-of-the-art GT cars, with an iconic car from each of the company’s six decades.

The 1950s are represented by a 250 Testa Rossa, one of the most successful Ferrari cars in the manufacturer’s history, winning the 12 Hours of Sebring, the 1000 km in Buenos Aires and the 24 Hours of Le Mans all in the same year, 1958.

The 1960s are symbolized by a 250 GTO, one of Enzo Ferrari’s most impressive achievements, combining the charisma of a grand tourer and performance of a sports racer.

The Daytona is undoubtedly the icon of the 1970s and is a timeless classic whose design signalled a step forward into the modern era.

The F40 was created to celebrate the company’s 40th anniversary in 1987 and quickly became a cult object for Ferrari enthusiasts, a car with cutting-edge F1 technology and blistering performance.

No other model than the ultimate F50 could represent the 1990s decade, when Ferrari turned 50. Unveiled at the 1995 Geneva Motorshow, it demonstrated the latest technological achievements of the Italian car manufacturer, including composite construction for a road car.

The last decade of the 21st Century is represented by the Enzo, which was named in honour of the company’s founder, whose charismatic personality still inspires Ferrari’s designers and engineers to this day. The Enzo set a new benchmark for the development of engineering solutions and demonstrated the synergies between F1 and GT cars.

In addition to the commemorative display in the Stable Yard, a 599 GTB Fiorano will be driven up the hill in the Sunday Times ‘In Gear’ Supercar Run by Ferrari GB Motorsport Director Enrico Bertaggia, as well as a 612 Scaglietti HGTS in a one-off Police livery. This 612 led the UK leg of the epic relay tour organized by Ferrari to celebrate the company’s 60th Anniversary and will be driven for this special occasion at Goodwood by a member of the Sussex Police Force. Both cars will be located in the centre of the historical display to represent Ferrari’s modern range.

The Relay Baton, symbolizing the 60th Anniversary Tour, will also be on display, together with a separate gallery of the 60 images which are enamelled on it, representing, one for each year, the most important drivers, events and people in Ferrari’s history. The Tour which started in Abu Dhabi in January will end in Maranello the same weekend as the Festival of Speed.

Ferrari’s presence at the Goodwood Festival of Speed is part of the company’s 60th Anniversary celebrations which saw the Prancing Horse beat the Guinness World Record for the ‘Largest Parade of Ferrari Cars’ at Silverstone, with an astonishing parade of 385 Ferrari cars, more than triple the previous record, during the Ferrari Racing Days on 9th June. With road and race cars from every decade of the Prancing Horse’s proud and unique heritage, Ferrari owners from the UK and all over the world joined together to create an amazing spectacle to celebrate Ferrari’s 60th Anniversary and the Ferrari Owners Club GB’s 40th Anniversary.

Ferrari’s display, located in the Stable Yard, will be open to all visitors of the Festival of Speed on Friday, Saturday and Sunday.