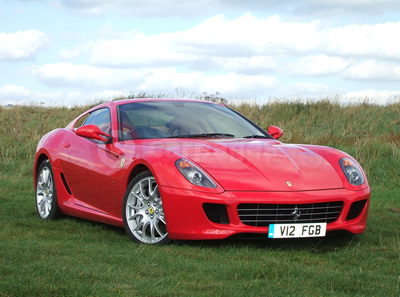 You have to feel sorry for the Ferrari engineers and designers. Every time they succeed in producing an outstanding car, their next job is to improve on it.

This was the case for the 599 GTB Fiorano. The brief was to design a two-door, front mid-engined, rear wheel drive, 2-seater, luxury car with performance that betters that of the iconic F40. Oh, and it has to look stunning.

The scratching of heads and chewing of pencils at Pininfarina has resulted in a clever combination of Italian flair and slippery aerodynamics.

For example, the most notable feature is almost invisible, especially when viewed from the side. The flying buttresses, which flank the rear quarter-light and wrap-around rear screen, are designed to channel the air towards the rear boot-lip spoiler. From certain angles it is easy to see that they stand off from the car but from others they look integral to the body.

For the 599, Ferrari have done away with the familiar, circular, quad rear lights, which have been replaced by single, round LED lights on either side and, for a change, the number plate position has been raised too.

Below the hefty rear bumper, there’s a black fairing that surrounds the two twin tailpipes and incorporates the diffuser, which provides downforce. This, together with the flat underbelly, means that the suction under the car is greater than the lift created by the upper body. We are told that the 599 is the most aerodynamic, 12-cyclinder Ferrari ever built.

At the front, the wide, sleek bonnet has a bulge that subtly declares that underneath is a big engine, that’s raring to go. The front grille and air intakes are not too large as to be ugly but are enough to do the job of cooling the brakes and engine.

There is no doubt that the 599 GTB attracts a lot of attention. It comes in various forms - not all of them are positive. People admire its good looks and imposing stance and, during the test, were happy to say as much, whenever and wherever it was parked. However, on the road, some of the excited finger-pointing of other road users tended to develop into a desire to race and some were equally happy in their displays of belligerent envy. But then, you do not buy a Ferrari of any sort, if you prefer to travel incognito.