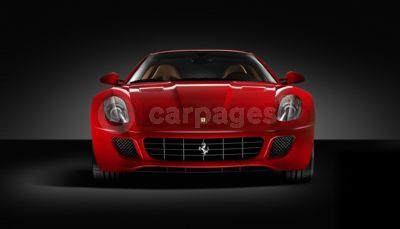 In its North American auto show premiere, Ferrari unveils the stunning 599 GTB Fiorano at the 2006 Los Angeles Auto Show. The 599 GTB Fiorano completes a range entirely overhauled in a little over two years.  "During the development of the 599 GTB Fiorano we dedicated a great deal of attention to the North American market and especially to California where Ferrari has a high concentration of passionate clients," said Amedeo Felisa, General Manager of Ferrari S.p.A.  "The V12 mid-front engine 599 GTB Fiorano represents the best of Ferrari's current production.  It is the highest performance production series Ferrari ever.  At the same time it provides unmatched comfort and driving pleasure," continued Mr Felisa.

2006 has been a significant year for Ferrari in terms of company performance, continuing the positive trend of 2005. In the first half of 2006, the company recorded revenues of € 706 million, a 16.7% increase on the same period last year. Ferrari also doubled its trading profit, which rose from € 32 to € 64 million with a total of 2,749 cars delivered to the dealership network (+4.8%.)

The Company, which will celebrate its 60th anniversary in 2007 with a worldwide event in which its clients will be the main participants, will also be showing the F430 Spider, the 612 Scaglietti as well as the F2002 single-seater, the 2006 F430 Challenge and a 1967 275 GTB at its Los Angeles stand.

Following on the great success of the just completed Panamerican 20,000, the 599 GTB Fiorano is the most eagerly awaited model on the Ferrari stand at Los Angeles. In completing the Panamerican 20,000 mile journey; a gruelling 84 day, 16 country trek from Brazil to the United States, two 599 GTB Fioranos were welcomed by a throng of fans at the New York Stock Exchange on November 17th where the finish line ceremony was held.  This trek was a great demonstration of the capability and reliability of the 599 GTB Fiorano on some of the most challenging roads in the Americas.

The 599 GTB Fiorano boasts absolutely blistering performance with its Enzo Ferrari-derived 5,999 cm 3 V12 engine which punches out 611 hp at 7600 rpm.  Boasting a power-weight ratio of under 6.1 lbs/hp , a stunning Pininfarina-designed body and an all-aluminium spaceframe developed in collaboration with Alcoa, the 599 GTB Fiorano offers a range of cutting-edge innovations which provide absolutely superior driving pleasure, handling and sportiness. The 599 GTB roars from 0 to 62 mph in an astonishing 3.7 seconds and from 0 to 124 mph in just 11 seconds with a top speed in excess of 205 mph. Courtesy of the ongoing technology transfer from Formula 1 to Ferrari's road cars, the 599 GTB Fiorano is equipped with two features that have proved enormously popular with its Formula 1 drivers: the F1-SuperFast gearbox which offers gear shifting in 100 milliseconds, and F1-Trac which optimises traction. Both features make their road car debut on this model. The 599 GTB Fiorano also boasts other features which that help ensure superior standards of usability, ergonomics and safety engineering: the SCM (magnetorheological fluid suspension system), developed in collaboration with Delphi, which provides improved bump absorption and body control, an enhanced manettino vehicle dynamics control switch, and a wind tunnel-honed body that delivers more downforce with increasing speed .

The uniqueness and distinctiveness of Ferrari's road cars can be further enhanced with the Carrozzeria Scaglietti personalisation programme which offers additional new options. The entire range of cars is compatible, for instance, with an iPod controlled via the radio-CD player. The 8-cylinder range is now also available with a two-tone Alcantara and leather interior as well as ball-polished Challenge wheel rims. The entire Ferrari range can also be treated with an anti-stone chipping protective coating. The Carrozzeria Scaglietti Personalisation Programme is divided into four distinct areas: Racing and Track, Exteriors and Colours, Interiors and Materials, Equipment and Travel. The programme was introduced in 1997 to allow owners to personalise their car to suit their own specific taste and requirements, making each one a genuinely unique vehicle. Since last year, all Ferraris built have included at least some personalisation features. Clients may also make non-catalogue special requests which the company will endeavour to meet in the spirit of the work done by Sergio Scaglietti with Ferrari in its earliest days.

Ferrari's marque development is also progressing apace, thanks both to new licensing contracts (Panerai for luxury watches, Marcolin for eyewear, Microsoft and Sony for video games) and to the excellent performance of existing ones. 2006 also saw the opening of two new stores in Italy; the Venice Ferrari Store and the Milan Malpensa Airport Store. By the end of the year, a store will open in Beijing followed by the Beverly Hills store set to open at the Beverly Center in the first quarter of 2007. Since the start of the year, there have been several major changes to Ferrari's commercial and company structure too. Our American headquarters has taken over responsibility for Central and South America, and a new sales division was also created for the Asia-Pacific region which covers 13 high potential markets including Japan, China, Australia and Hong Kong.