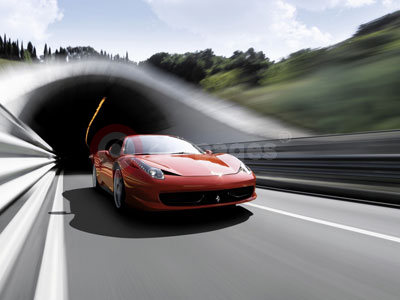 The Ferrari 458 Italia has scooped two prestigious awards from BBC Top Gear Magazine, one of the world's most influential automotive magazines. Not only did the British magazine nominate the Ferrari 458 Italia 'Supercar of the Year', but also, for the very first time for Ferrari, the coveted title of 'Car of the Year'. This brings Ferrari's tally of consecutive Top Gear Magazine Awards to the astonishing figure of eight in seven years.

The Ferrari 458 Italia was revealed at the Frankfurt Motor Show in September to immediate critical acclaim. Following an extensive international media test drive programme in Maranello, the home of the fabled Prancing Horse, the car has been the subject of enthusiastic reviews, with its handling, roadholding, ride comfort and performance all being subject to the kind of superlatives rarely seen from the world's leading journalists.

In electing the Ferrari 458 Italia as their 'Supercar of the Year', BBC Top Gear Magazine underlined how it has established "the new benchmark in getting from A to B as rapidly as possible." They also described the 570-hp V8-engined berlinetta as "a game-changing car."

When nominating the car for the overall top award as 'Car of the Year', BBC Top Gear Magazine described how it became "our winner because the scope of its abilities is absolutely breathtaking", concluding that the Ferrari 458 Italia "isn't just a worthy winner, it's off the scale!"

This is a 12-year+ news article, from our Ferrari archive, which dates back to the year 2000.

If in doubt check with your local Ferrari dealer as car prices and technical data will have changed since 2009.