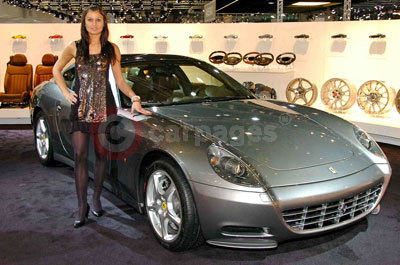 Ferrari is present at the 78th International Geneva Motor Show with its entire GT range, the F2007 single-seater that won last year’s Formula 1 Drivers’ and Constructors’ World Championships, the legendary 365 GTB4 “Daytona” which celebrates its 40th anniversary this year, and a special area dedicated to the One-to-One Programme.

Taking pride of place at the Ferrari stand, however, is the 612 Scaglietti, the model being used to inaugurate the new One-to-One Personalisation Programme. Ferrari intends to allow every client to fully personalise this flagship model, courtesy of a wide array of new content as well as the options available through the Carrozzeria Scaglietti Programme. In fact, a special dedicated “atelier” area has been set up at the factory in which clients can put together their own bespoke 612 Scaglietti accessory by accessory, detail by detail. In exactly the same way as they would at a haute couture fashion house, owners can choose details and materials they want for their car in consultation with the Ferrari experts who will actually build it to their exact specifications and tastes.

We have recreated a compact version of the real atelier (due to be officially opened in Maranello in the near future) on the stand. Further such ateliers will then be opened over the next few months in other parts of the world.

Clients will be assisted in making their selections by dedicated Programme consultants who can help them at every stage of defining their car’s specification. Naturally, despite the many variations on offer, the Ferrari flagship’s benchmark quality and styling characteristics will remain unchanged and no modifications will be permitted that would impinge on the signature Prancing Horse safety and reliability.

All of these unique new 612 Scagliettis will be built in a dedicated assembly area at the Maranello factory.

To underscore the sheer depth and flexibility of the personalisation options available for the 612 Scaglietti, we are exhibiting at Geneva a version which has been inspired, right down to its perforated leather Daytona seats, by the classic 365 GTB4 which will stand alongside it. The famous 365 GTB4 was, of course, affectionately dubbed the Daytona in honour of the historic one-two-three finish delivered by the Scuderia Ferrari in the eponymous 24 Hour Race in 1967. The arrival of the 365 GTB4 was a significant moment in the company’s history and Ferrari will be celebrating this car’s 40th anniversary in 2008 with a series of events across the globe.

The 612 Scagliettis being used to launch the One-to-One Programme incorporate a series of technical evolutions that reflect the Ferrari philosophy of constantly introducing innovations in each model. Most notably, the V12 flagship now boasts an electrochromic panoramic roof which covers the entire top of the cabin. This has the dual advantage of giving occupants the feeling of driving along in a drop-top whilst enjoying the comfort and safety of a coupé. However, this is no ordinary panoramic roof. It is made from electrochromic glass which can be changed at the touch of a button to adjust the levels of sunlight allowed into the cabin. The electrochromic glass solution was developed in close collaboration with Saint Gobain, a partner with whom Ferrari has most recently developed a similar highly innovative solution for the Superamerica.

In addition to its electrochromic roof, the 612 Scaglietti also sports the aptly named SuperFast gearbox which delivers an exceptional gear-shifting time of 100 milliseconds and a reduced inertia clutch to enhance the engine’s responsiveness still further. The iconic Ferrari manettino, now featured on the entire range, has also been added to the steering wheel.

Another model being showcased at Geneva is the F430 Spider, a rear-engined 8-cylinder that combines blistering performance with open-top driving pleasure. The version on the stand is displayed in a historic colour Grigio Ferro, with a sophisticated Cioccolato interiors. The F430 Spider has proved an enormous success since its launch and in 2007 won prestige awards from international publications, such as Quattroruote, Autozeitung, Auto Illustrierte and Auto Motor und Sport.

The Company’s sporting history is also represented on the stand by the 599 GTB Fiorano, the highest performance production model ever built at Maranello and seen here in a classic Rosso Corsa livery, and the 430 Scuderia, an extreme model voted “Dream Car of the Year” by the authoritative British car magazine Top Gear.

The more track-oriented side of Ferrari’s dual soul is represented most ably on the stand by the F2007, the single-seater that won the World Championship last year, bringing to 15 the overall number of Formula 1 Drivers’ and Constructors’ titles won by Maranello so far.

The 612 Scaglietti is the result of an avant-garde design that continues the great Ferrari 2+2 tradition in fabulous style. Designed by Pininfarina, the 612 Scaglietti is named in honour of Sergio Scaglietti, the legendary Modenese stylist and coachbuilder responsible for bodying some of the most beautiful Ferraris of the 1950s and 60s. The 612 Scaglietti epitomises Ferrari’s talent for innovation and design. This thrillingly nimble, beautifully balanced sporty front-engined rear-wheel drive berlinetta offers a cabin capable of accommodating four occupants in unprecedented onboard comfort, thanks to a host of accessories and a fantastic specification. The 612 Scaglietti  is a sumptuous, roomy two-door four-seater that’s a pleasure to be aboard regardless of the driving conditions.

The chassis and bodywork. These are made entirely from light, tough aluminium which translates into enhanced performance, braking and road-holding all in one.

Clutch: Twin-plate to reduce weight and rotating masses as well as thermal and mechanical inertia.

Brakes. Carbon-ceramic material (CCM) Brembo brakes with vented discs that are fade and vibration-resistant even in extreme and intensive situations. The fact that the brakes are so light also reduces the unsprung masses. Large-diameter discs: 380x36mm with 6-pot callipers front and 360x34 and 4-pot callipers rear.

This is a 13-year+ news article, from our Ferrari archive, which dates back to the year 2000.

If in doubt check with your local Ferrari dealer as car prices and technical data will have changed since 2008.