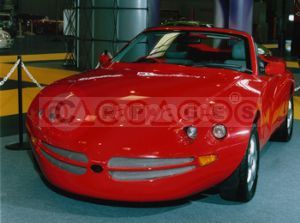 The first customer FBS Census V6 was handed over and paid in full on 20th June 2002.

The proud owner commented “I read a review of the Census in December and I was immediately captivated by the prospect of owning a truly unique British sports car with classic front engine / rear drive and outstanding performance. My test drive was love at first sight! The ability to have input into the final finish including a personal fitting was unusual and appealing. Now I have received the car my confidence is repaid in spades. The car is great to drive - quick responsive and exhilarating but also very comfortable and not as primitive as some other cars I looked at. The only downside? I have had to get used to being constantly accosted at traffic lights and in car parks with envious drivers wanting to know more about the car!”

The first customer car at the NEC Sports Car Show just before it was registered and delivered. This car has an interior to the customer's personal specification and is loaded with extras including alarm, tracker and oil system readout as well as the usual leather and alloys.

This first delivery happened just two years and one day from full funding of the project. All on a budget of less than half a million pounds. “I sometimes wonder what other small car companies do with all their time & money.” jokes FBS Cars founder Andrew Barber.

The second customer car will be delivered in early July, that car is also paid for. “This is a measure of the confidence people have in us.” says Andrew Barber. Work has begun on assembling the third customer car for delivery later in July.

The next available delivery slot is August. FBS Cars claims the Census is unique “You cannot get any other sports car which at this price combines the handling, performance and comfort of a Census. You either have to pay a lot more or sacrifice at least one of the parameters.” explains Andrew Barber.

If in doubt check with your local FBS dealer as car prices and technical data will have changed since 2002.

FBS Census Images may not be UK specification cars. Colours and exterior and/or interior elements may differ from actual models.