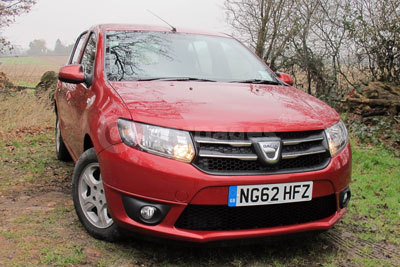 Here is a car for tough recessionary times. The Dacia Sandero is built in Romania and imported by Renault. It is a budget model with a starting price of £5,995 for the petrol engine model, or you can buy Britain’s cheapest diesel model for £8,395.

Dacia (it’s pronounced “Dar-cha”) traces its history back to 1966, when it was founded as Romania’s state car-maker, building obsolete Renault models under licence to the French company. Renault bought Dacia in 1999, and started planning for expansion. That began in 2004 when the Dacia Logan was launched, a budget saloon aimed at Eastern European markets and developing countries. It was billed as the “5,000-Euro car”, and it was timely, the right car for tough economic times. More than 1.8 million have been sold around the world. The Sandero, a hatchback version of the Logan, first appeared in 2008. Dacia also makes a 4x4, the Duster.

The Sandero has since been updated and the new model went on sale in the UK in January 2013. It comes in a choice of three engines and three trim levels. The base car at just under £6,000 has a 1.2 litre, four-cylinder petrol engine (74 bhp) and very modest performance. A better bet is the 0.9 litre, three-cylinder turbocharged petrol Sandero (89 bhp) at £7,395. Or there is the 1.5 litre, four-cylinder turbodiesel model (also 89 bhp) at £8,395. Trim levels are Access, Ambience and Laureate.

A pumped-up, ‘butch’ version of the car, called the Sandero Stepway, joins the range from May 2013. The price will be from £7,995 to £10,785. Renault expects it to become the most popular model, ultimately accounting for more than half of all Sanderos bought in the UK.

The badges say Dacia, but the engines are Renault. The 1.5 litre dCi engine in our test car is the same unit that you can also find in the Renault Clio and Megane. Don’t expect vivid performance, but it is perfectly reasonable with a 0-62 mph time of just over 12 seconds and a top speed potential of 107 mph. It is frugal too, with a CO2 emissions figure of 99 g/km and average fuel economy in the mid-70s mpg.

The Sandero is no ball of fire, but it’s no sluggard either, and the performance feels a lot less budget than the price tag. Considering the modest outlay for what is a pretty roomy car for its dimensions, the Sandero has a decent turn of speed and is a willing workhorse. The gearchange is a bit notchy in the lower ratios and the steering has a slightly dead feel that is not as crisply informative as it could be.

This is a 8-year+ news article, from our Dacia archive, which dates back to the year 2000.

If in doubt check with your local Dacia dealer as car prices and technical data will have changed since 2013.

Dacia Sandero Images may not be UK specification cars. Colours and exterior and/or interior elements may differ from actual models.