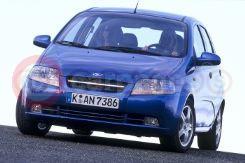 With its strong, unmistakable design by Giugiaro in Turin, the new Daewoo Kalos is impressive and eye-catching. Compact and with five doors, it not only has striking exterior contours but also an extremely spacious interior resulting from the use of careful packaging design. Its chassis offers agility and comfort on the road and body construction offers excellent safety features. And like all Daewoo products, the new Kalos will offer outstanding value for money.

The front-wheel drive Kalos is powered by a 1.4-litre, 61 kW/83 hp four-cylinder petrol engine. Two derivatives will be available when the car is launched in the UK late in 2002 - SE and SX. Both feature a wide range of safety and comfort features as standard. For example, the SE has power assisted steering, anti-lock brakes, central door locking with alarm system, driver and passenger front and side airbags, electrically operated front windows, three-point safety belts on all seats and Isofix anchorage points for a child seat in the back.

The design: Individual body language with striking elements of style

"When we designed it, we set out to produce an alternative to conventional lines and tread new paths in terms of design," says Giorgetto Giugiaro, explaining the individuality of the compact Kalos. Apart from the striking headlamps in a clear-glass look and the indicators positioned beneath them in the same housing resembling eyelids, the front of the car is also characterised by the harmonious way the bumper and chrome grille blend into the bonnet.

Extremely short overhangs combined with the high roofline, the lower window edge rising slightly to the rear and the steeply angled back give the Kalos well-balanced proportions with excellent space utilisation. The wide, muscular wheel arches and the deep groove in the lower area of the doors, which makes a dynamic downward kink in front of the rear wheels, are other notable design features. The additional third small side window not only opens up new perspectives for the rear passengers, it also optically loosens up the rear of the car, adding to the already light and airy feel of the design.

"One of the strengths of the Kalos is its packaging - despite its compact exterior dimensions, it offers a very spacious passenger compartment," says Daewoo's Chief Engineer, Chang-Sun Yoo, describing the intelligent use of space in the new car. Its compact measurements (length/width/height: 3.88/1.67/1.49 metres) make the Kalos outstandingly easy to manoeuvre, even in city traffic. Yet because of its unusually high roofline and one of the longest wheelbases in its class (2.48 metres), there is still plenty of space in the interior of this five-seater. The 955 millimetres of headroom is unmatched in its class.

The standard fit 60/40 spilt rear seat backrest can be folded down for even greater capacity. If more room is needed, the whole bench can be jack-knife folded and secured behind the front seats. The loadspace according to the VDA standard is then an exceptional 735 litres. With all the seats and the parcel shelf in place, the luggage compartment has a capacity of 175 litres.

With its high-traction 1.4-litre four-cylinder petrol engine and standard five-speed manual gearbox, the Daewoo Kalos is not lacking in performance. The 61 kW/83 hp power train takes the front-wheel drive Kalos to a maximum of 170 km/h (105.4 mph) and has a maximum torque of 123 Nm at 3,000 rpm. In the MVEG cycle, the compact Korean has an overall consumption of 7.5 litres over 100 kilometres
(37.7 mpg).

The suspension design of the new Kalos - at the front, independent MacPherson struts, at the rear, independent via a torsion beam - and the sophisticated chassis geometry with a long wheelbase and wide track, combine driving safety with excellent comfort. The Daewoo engineers refined the chassis in Britain, on the proving ground at MIRA (Motor Industry Research Association) near Nuneaton, specifically for European conditions. The standard power-assisted steering system is engine speed-dependent and therefore combines precise steering feel on the open road with high manoeuvrability at parking speeds.

The equipment: Comfortable with functional features as standard

"Joining its smaller family partner Matiz, Kalos takes the next step in Daewoo's development with another stylish new car. It will appeal to a target group that I would describe as 'smart shoppers', people who want the style without paying a premium," says Andy Carroll, designated managing director of GM Daewoo UK, outlining the target group for the Kalos.

In addition, the Kalos SX features air conditioning, front fog lamps, electrically operated rear windows, height-adjustable driver's seat and a handy picnic table that folds out from the back of the passenger seat.

The new Daewoo Kalos will be on sale in the UK from late 2002. Pricing and full specification detail will be issued when the car is revealed in the UK at the British International Motor Show in Birmingham on 22 October 2002.

This is a 18-year+ news article, from our Chevrolet archive, which dates back to the year 2000.

If in doubt check with your local Chevrolet dealer as car prices and technical data will have changed since 2002.

Chevrolet Images may not be UK specification cars. Colours and exterior and/or interior elements may differ from actual models.