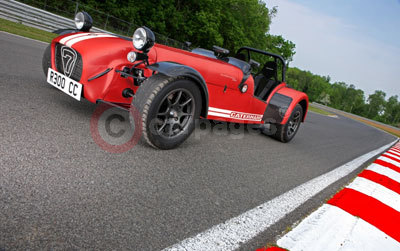 Caterham’s famous ‘Superlight’ family is now complete with the British manufacturer releasing details of a new generation of its Superlight R300.

Following in the rear tyre tracks of the motorsport derived R400 and R500, the latest Seven punches from 0-to-60mph in 4.5 seconds courtesy of a new 2.0-litre Ford Duratec engine, tuned by Caterham Powertrain (CPT) to deliver a responsive 175bhp.

Originally launched in 2002 and fitted with a Rover engine, the previous R300 was Caterham’s best-selling Seven thanks to an addictive character fuelled by its perfect blend of performance and driving pleasure. The new Ford-powered model builds on this platform with increased engine performance and chassis developments, all whilst retaining the R300’s winning personality.

Among many developments, the new R300 benefits from styling cues and technical evolutions first seen on its ‘big brother’ – the explosive Superlight R500 – with the addition of a similar flush button dash design and keyless ignition system, fitted as standard.

Amongst a wide range of optional extras, hardened enthusiasts will also be able to add Stack data logging instrumentation, a dry sump oil system and, for track-day regulars, a limited slip differential.

Translated through Caterham’s proven 6-speed gearbox, the 2.0-litre powerplant’s 175bhp and 139 lbs-ft of torque is able to spin the R300’s bespoke Avon CR500-shod Superlight aluminium wheels to a top speed of 140mph.

With more power, more torque and more immediacy, the Superlight R300 will start at £24,995 in component form and £27,995 factory built with delivery starting in spring 2009.

Further expanding the range to offer customers a wider range of choice is the addition of another new Seven – the Roadsport 175.

Despite being fitted with the hugely capable Series 3 chassis and utilising the same 175bhp, 2.0-litre Caterham Powertrain (CPT) Duratec engine fitted to the R300, the new Roadsport is aimed at drivers largely focused on B-Road blasts and touring.

The Roadsport trades its more track focussed features, such as lashings of carbon fibre and track-biased suspension and brakes, to come fitted with weather equipment and a heater as standard. Other differences to the R300 include a 5-speed gearbox with longer ratios and 14-inch alloy wheels.

This is a 12-year+ news article, from our Caterham archive, which dates back to the year 2000.

If in doubt check with your local Caterham dealer as car prices and technical data will have changed since 2008.

Caterham Seven Images may not be UK specification cars. Colours and exterior and/or interior elements may differ from actual models.