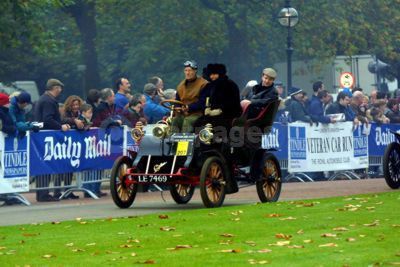 A fleet of 20 pre-1905 Cadillacs will be taking part in the 110 th Anniversary London to Brighton Veteran Car Run (LBVCR) on Sunday November 5.  A grand total of 492 cars are expected at the event, which departs London's Hyde Park at sunrise (7.07 am) for the 60-mile run to Brighton.

Most of the 20 classic Cadillacs in this year's LBVCR are regulars in the event, six of which date from 1903, a year after the Cadillac's inception.  Drivers and their passengers include a pharmacist, a professor of aerothermal technology and a journalist from the New York Times.  Entrants will be travelling from as far as North Carolina, USA, giving the quintessentially British event a truly international flavour.  The veteran vehicles, which collectively have an average cruising speed of 19 mph, include one that was used in the 1953 film Genevieve , and several others with nicknames such as Bess, Madge and Geraldine that have been cherished by their owners for many years.

The LBVCR takes place on the first Sunday of November each year, commemorating the Emancipation Run of November 14, 1896, which celebrated the passing into law of the Locomotives on the Highway Act.  The Act raised the speed limit for 'light locomotives' from 4 mph to 14 mph and abolished the requirement for such vehicles to be preceded by a man on foot carrying a red flag.

Further information on the 2006 London to Brighton Veteran Car Run, including details of all entries, can be found on www.lbvcr.com .  Details on Cadillac's modern day range can be found at www.cadillaceurope.com.

This is a 14-year+ news article, from our Cadillac archive, which dates back to the year 2000.

If in doubt check with your local Cadillac dealer as car prices and technical data will have changed since 2006.