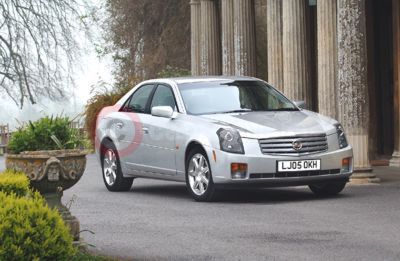 The Americans have been good at choosing memorable brand and model names for their cars. But in Europe historically the names have, in most cases, been better than the products.

Mustang, Viper, Hummer, Pontiac and Thunderbird are just a few of those names. Now the famous brands of Cadillac and Corvette have officially returned to the UK market after a break of three years.

Initially sales started in 1998 through 11 Vauxhall dealers selling Cadillac Seville, Chevrolet Blazer and Corvette models. The prices were too high, the driving qualities were not up to European requirements and even huge discounts did not lift sales much above 3,000 units in nearly five years.

Independent specialist importers of American vehicles have continued to bring Cadillacs, Corvettes and other monsters to the UK.

This time, although Cadillac and Corvette are still part of the giant GM Corporation, this latest European venture will not directly be in the hands of America’s automotive ‘big brother’ even though Cadillac at least has been re-born in the USA. Over the last four years it has become America’s fastest growing luxury brand ahead of BMW, Mercedes, Audi and Lexus.

Now Cadillac and Corvette Europe Limited, part of the Dutch run Kroymans Group, are running things in 28 European countries and they have uniquely appointed one of the world’s largest dealer groups, Stratstone-Pendragon, to distribute and sell both model ranges in the UK.

Supporting the dealer group, Cadillac and Corvette Europe Limited do have a small UK liaison operation based in Bracknell, Berkshire headed by Malcolm Wade, Managing Director UK. The message from them is that in the UK their biggest problem is to convince customers this time the brands are here to stay and that the products are now engineered equipped and priced to meet European requirements.

In addition to the Cadillac and Corvette brands the same operation will also officially introduce the Hummer 4x4 brand to the UK in January 2007 with South African built H3 models available in right hand drive form and with diesel engines.

Imports and sales of Cadillac and Corvette started in the UK in May of this year through a very small number of dealerships. Currently eight UK dealerships are confirmed, Newcastle, Leeds, Manchester, Birmingham, Park Lane in London, Croydon, Reading and Cardiff. Leicester is soon to be added. In total Malcolm Wade sees the optimum number of UK dealers being around the 20 mark which should be achieved in the next two to three years when the product line-up will have been extended and all-important diesel powered models added to the range. With the new models in the line-up Wade anticipates sales of up to 7,000 units a years by 2008 with 80 per cent of sales being accounted for by the Cadillac BLS, yet to be introduced to the range. This model will be a BMW 3-Series sized saloon with 1.9-litre diesel and 2.0/2.8-litre petrol engine options. It will be built in Sweden specifically for the European market and the BLS will share the GM platform and much of the running gear used by GM’s Saab and Vectra models. The GM positioning of the Cadillac brand is above Saab, which in turn is above Vectra, which is above Cadillac.

This is a 15-year+ news article, from our Cadillac archive, which dates back to the year 2000.

If in doubt check with your local Cadillac dealer as car prices and technical data will have changed since 2005.