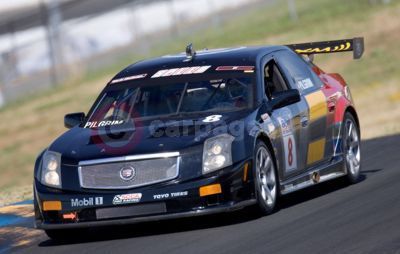 BREUKELEN - With a total of four victories, two pole positions and nine podium finishes, the black CTS-V racers of Team Cadillac claimed a clean sweep of both the drivers’ and manufacturers’ championships in the 2005 SCCA SPEED World Challenge GT series for production-based models. In addition to jubilation for driver Andy Pilgrim, the manufacturer’s title made history as Cadillac’s first-ever racing championship crown.

The combination of the Cadillac CTS-V chassis with the race-prepared GM LS2 small-block V8 engines gave Team Cadillac the best possible equipment for the season-long battle against predominantly two-seat sports car opposition on road courses and street circuits across North America. Along the way, the Team Cadillac CTS-Vs claimed three double victories and has made Cadillac history with its first 1-2-3 podium sweep at Road Atlanta in Georgia. In this hotly contested competition, the titles were only settled in the closing laps of the final round of the championship.

Cadillac’s champion driver Andy Pilgrim was the model of consistency throughout the season, finishing in the top 10 of every round in the 11-race series. After second-place finishes in Sebring, Florida and Road Atlanta and a third-place result in Cleveland, Ohio, SCCA rules dictated that Pilgrim's success be ‘rewarded’ with 100 kg of ballast. He countered this burden with careful strategy which delivered three fourth-place finishes from the final three races, plus the title.

Team Cadillac's second full-time driver was Max Papis, who brought his special mix of style, charisma and excitement to the SPEED GT series. Whilst securing his victory in Laguna Seca, the popular Italian clinched the manufacturers’ title for Cadillac and secured fifth place in the drivers' standings.

Team Cadillac's third car, raced by a trio of accomplished guest drivers, also contributed significantly to the team’s success with two victories. Max Angelelli posted a pole and four podium finishes in five appearances, including a win at Lime Rock, Connecticut. GM Performance Division director John Heinricy was runner-up at Mid-Ohio, and Ron Fellows won the Mosport round in Canada for the second successive year.

The SPEED GT series pitted Cadillac's four-door performance luxury saloon against a field of predominantly two-seat sports cars. The championship-winning Cadillac CTS-Vs were originally built on the production line at GM's assembly plant in Lansing, Michigan. Although modified for competition, the race cars retained 58 per cent production content by weight. Moreover, the racing programme maintained strong links with the engineering team that designed the production version.

"The ability to take such a high level of hardware directly from the street car to the race car speaks volumes about the performance potential of the street version of the Cadillac CTS-V," said GM Racing director Mark Kent. "By using GM facilities and personnel, we were able to draw upon GM's expertise to optimise the performance of the race car," Kent noted. "With exposure to the race car, the GM engineers and technicians gained valuable insight into race car structure and dynamics. The technology transfer was truly a two-way street."

This is a 15-year+ news article, from our Cadillac archive, which dates back to the year 2000.

If in doubt check with your local Cadillac dealer as car prices and technical data will have changed since 2005.