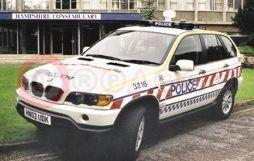 Hampshire Police has taken delivery of the world's first BMW X5 in police specification. The first 3.0 litre diesel engined X5 is now on duty with the Hampshire constabulary and a further two models will soon be added to the fleet.

The decision to recruit BMW X5 4x4s to the 804-strong vehicle fleet, which includes 560 cars, light commercial vehicles, motorcycles and three marine craft based on the Solent, follows comprehensive testing and analysis of a number of rival vehicles.

The Hampshire force runs 47 BMW cars and was the first UK constabulary to add the German marque to its fleet in the early 1970s.

Hampshire Police fleet manager, John Bradley, said the force evaluated a wide range of 4x4 vehicles to test their ability in a variety of conditions including motorway patrol and off-road duties.

After taking account of the views of police officers as well as vehicle operating costs, fuel economy, performance, vehicle ride and handling characteristics, health and safety issues and residual values, the BMW X5 came top of the class.

Until the arrival of the X5 Hampshire Police operated 23 4x4s composed of Land Rover and Nissan models and Mr Bradley said: 'We tested a number of 4x4 models under a variety of conditions and the BMW proved to be the best'.

Many police officers who drove the X5 said its handling was equal to that of a car as it was equally responsive, sure-footed and safe in different driving conditions.

Tim Goss, authorities manager, BMW (GB), said: 'We are delighted that the X5 has joined the ranks of police vehicles and that Hampshire Police, with whom we have enjoyed a long relationship, have taken a lead in introducing the model.

'With the Hampshire force taking delivery of the X5 and the model now added to the Home Office's list of approved police vehicles, in diesel form, I anticipate other police forces will soon start looking at adding the BMW X5 3.0d to their fleets'.