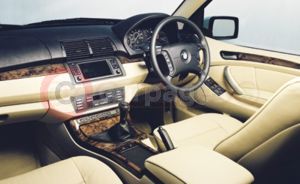 But the appeal doesn't stop at intelligent four-wheel drive. A selection of new, improved engines adds to the allure, while a series of subtle design changes combine to make the best all-rounder even better.

More power, torque, refinement and better fuel consumption come courtesy of three new engines which feature in the 3.0d, 4.4i and the forthcoming 4.8is. (The 3.0i retains the tried and tested six-cylinder unit).

Launched in April 2003 for the 730d, and recently introduced in the 530d and 330d (with lower output), the X5's new six-cylinder 3.0d engine boasts an 18 per cent increase in maximum power over the previous X5 3.0d, up from 184 to 218 bhp. The corresponding torque figure is boosted by 22 per cent to 500 Nm, the same as the outgoing M5. This high-performance diesel also claims a two second improvement in 0-62 figures with maximum speed increased to 130 mph, thanks in part to its standard six-speed gearbox, yet it still reports improvements on the combined fuel consumption cycle and CO2 figures.

The new V8 4.4i is 0.5 seconds quicker from 0-62 mph than its predecessor, achieving this in just seven seconds. Already available in the 745i and 545i, this slightly modified version offers a maximum power of 320 bhp at 6,100 rpm but, once again, fuel consumption is down - or rather up from 20.3 to 21.6 mpg. The 3.0i petrol, which retains the engine from the existing model, reports improvements in 0-62 figures and fuel consumption thanks to the inclusion of its six-speed manual gearbox as standard (compared to five-speed on the outgoing model).

If in doubt check with your local BMW dealer as car prices and technical data will have changed since 2003.