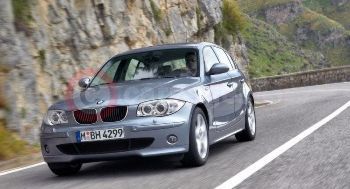 BMW is poised to shake up the compact executive segment with the arrival of the new 1 Series. Featuring four engines, three gearboxes and rear-wheel drive, a combination not found in any of its competitors, the BMW 1 Series makes its entrance in autumn 2004 and will immediately offer a new benchmark to driving dynamics in its class.

The high-performance four-cylinder petrol model is the BMW 120i with its 150bhp and 200Nm (at 3,600rpm) 2.0-litre VALVETRONIC petrol engine. Light and nimble, the 120i covers zero to 62mph in 8.7 seconds before going on to achieve a maximum speed of 135mph.

The BMW 1 Series launch line-up is completed with two versions of the powerful yet frugal 2.0-litre common rail diesel engine. The 122bhp BMW 118d averages 50.4mpg while posting a zero to 62mph time of 10 seconds and reaching a top speed of 125mph. The higher-performance 163bhp BMW 120d achieves 49.6mpg yet is capable of a 7.9 second zero to 62mph time and a 137mph top speed. Instant turbo power delivered smoothly to the red line results in the 120d posting sharper performance figures than its 2.0-litre petrol equivalent.

In-gear overtaking in both diesel models should prove rapid thanks to a maximum torque of 280Nm and 340 Nm respectively, much of this urge available from a low 2,000rpm. Both diesel-engined derivatives and the two petrol units are EU4 emission compliant.