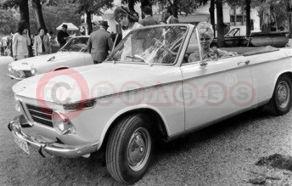 This dynamic sports saloon set a new path for the compact saloon car which didn't need to look, and handle, like a soggy Christmas pudding. It also led to the first incarnation of the 3 Series in 1975.

The BMW 1600 made its debut on the occasion of BMW's 50th anniversary in 1966 - it was a time when the Beatles were at the height of their success, when Mohammed Ali (née Cassius Clay) brought a new meaning to the word professional sportsman, and when the race was on between Russia and the USA to put a man on the moon.

In various forms, including the first European turbocharged car (the 2002 Turbo), the 02 Series was in production for 11 years and 825,000 examples were made. It became a firm favourite on the racetracks winning both German and European Touring Car Championships as well as hill climbs, endurance events and rallying.

Naturally, BMW's Mobile Tradition department will focus on the 2002 and its heritage during this year. Also the very active and enthusiastic '02 register' of the BMW Car Club (GB) will hold a range of events starting on February 17 .... five days before 20-02-2002.