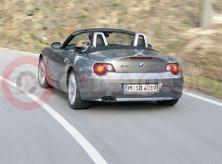 The capital of France is once again the capital of the motoring world from 28 September - 13 October 2002, with BMW supplying the highlights: This year's Mondial de l`Automobile sees the launch of the BMW Z4 as well as the six- and 8-cylinder diesel engines in the BMW 730d and 740d - three world debuts setting the standard in their class. And - quite appropriately for the country of Jules Vernes - visitors to the Show are able to look into the future on the BMW stand, intelligent Adaptive Light Control (ALC) revolutionising headlight technology and guiding the driver along winding roads. BMW Z4 - The Thoroughbred Roadster For Pure Driving Pleasure

The world debut of the BMW Z4 marks the highlight of BMW's appearance at the Paris Motor Show. This open two-seater designed for dynamic driving pleasure without the slightest compromise offers pure enjoyment on the road. Through its design alone, bearing out and accentuating BMW's new design language, the Z4 is truly outstanding also in its looks.

With the market launch of the BMW Z4 3.0i (170 kW/231 bhp) and the BMW Z4 2.5i (141 kW/192 bhp) commencing in autumn of this year in the USA and in spring 2003 in Europe, this roadster absolutely thrilling in every respect underlines BMW's special competence and position in the sports car segment. And at the same time the Z4 is not only dynamic and sporting, but also comfortable and refined, offering generous space for a roadster to the benefit of both the driver, the passenger and their luggage, an optional fully automatic roof never seen before in this class, top-end HiFi systems developed especially for the Z4, and a navigation system with DVD memory featured for the first time in a BMW. All this makes the Z4 a genuine spearhead in technology.

BMW has been the leader in diesel engine technology for almost two decades, an achievement clearly confirmed by some 1,500,000 units of the 3, 5 and 7 Series BMW diesels sold throughout this period.

In Paris BMW's new six- and 8-cylinder diesel engines in the 730d and 740d are now opening up a new dimension in diesel motoring, offering unprecedented performance and agility combined with supreme comfort and almost sensational economy. The latest common rail technology injects fuel with a pressure now increased to 1600 bar, fuel thus entering the system and being atomised even faster than before in the interest of extra power and fuel economy.

Both engines easily outperform the EU3 emission standard and they are the first diesel engines in the world to be combined with six-speed automatic transmission. And it almost goes without saying that the two diesel models come with all the innovative technologies and features to be admired in the petrol-engined models of the still young BMW 7 Series, including Dynamic Drive active suspension, Electronic Damper Control (EDC-C), the ISIS airbag safety system and the iDrive driver control concept, to mention just the most outstanding features.

With BMW's appearance in Paris clearly demonstrating the benchmark in technology in the world of motoring today, BMW at the same time is presenting a revolution for the car of tomorrow: Creating intelligent Adaptive Light Control (ALC), BMW's engineers have succeeded in illuminating the road ahead for the BMW driver taking a bend and following winding roads. This BMW innovation about to enter production standard improves the recognition of objects and obstacles in the dark by up to 34 per cent, thus ensuring a significant enhancement of traffic safety.

This anticipative illumination of the road ahead is made possible by sensors recognising changes in the car's direction before they even happen. In the first phase of development, anticipation of the road ahead is based on data covering the car's current speed, its steering angle and the yaw rate. In a further stage of development, additional information such as the course of the road will be provided through the GPS navigation system.