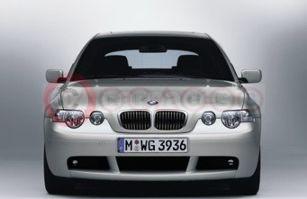 New 325ti Sport Compact The BMW 3 Series Compact line up will be expanded with the addition of a new 325ti Sport model. Priced at £23,550, it will arrive in the UK in April.

Based on the 6 cylinder 325ti SE Compact this car features aerodynamic body styling and a sporty interior design to complement its dynamic on-road performance. The technical and performance details of the 325ti Sport Compact remain the same as the 325ti.

The 325ti Sport Compact comes with the following extra specification

The 325ti Sport Compact is available in six exterior and interior upholstery options.

The new BMW 7 Series has been awarded the accolade of 'Best Engineered Car for 2002' in Automotive Engineering International magazine.

The editors of AEI noted: "The 7 Series was selected because it points the way not only for luxury/performance sedans, but also for other vehicle segments".

Britain's biggest motor magazine, Top Gear, awarded two of their top accolades to the BMW Group in its 2002 Awards.

2001 was the most successful in the history of BMW M, the company formerly called BMW Motorsport which was founded 30 years ago. Established in May 1972 this 'manufacturer of individual automobiles' established a new record in its main business area, the sales of M cars, with approximately 23,000 cars sold.

The United Kingdom is one of the three largest markets in the world for M cars. In 2001 BMW Great Britain sold 1,739 M cars.

The current waiting list for M3 is still long. M3 Coupés cannot on average be delivered before October 2002 whilst Convertibles are sold out until December 2002.