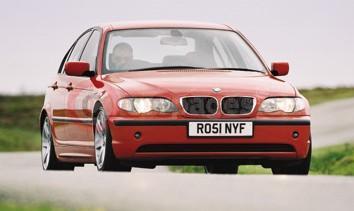 From April 2002 the BMW 3 Series range will be enhanced by the addition of a new 316i Saloon, traditionally BMW's second bestseller (after the 318i Saloon). Powered by the acclaimed N42 1.8 litre VALVETRONIC engine, built at Hams Hall, Warwickshire, the new 316i offers more power and torque, better acceleration and a higher top speed. Despite these performance improvements, fuel consumption for the new car is lower by 11 per cent with the attendant benefit of lower CO2 emissions of 172 grams/km.

The former 316i ceased production in Summer 2001 and, due to production scheduling, did not receive the more efficient VALVETRONIC engine until now. It is, however, a timely introduction since the new company car benefit in kind taxation comes into force in April and with lower CO2 emissions rating the 316i slots into the second lowest (i.e. 16 per cent BIK category).

This difference will be seen in the salary slips of every company car driver from the end of April.

Standard specification remains the same as its predecessor and the insurance rating of 12E will ensure the BMW 316i is inexpensive to run. High residual values will make sure it stays that way throughout its life.

On the road prices are :

For the first time in the new shape there will also be a 316i SE Touring as the entry model. Powered by the same 1.8 litre VALVETRONIC engine as the Saloon, the new model is only available in SE form due to the pattern of customer demand exhibited with other Touring models.

The 316i SE Touring accelerates from 0-62 mph in 11.2 seconds and reaches a top speed of 125 mph. Its combined fuel consumption of 38.7 mpg and CO2 emissions level of 177 gms/km confer a similar advantage over its petrol-engined competitors in the market place to that of its Saloon counterpart.

Like the 316i Saloon, the new Touring has an ABI approved insurance rating of 12E and is available from April 2002.