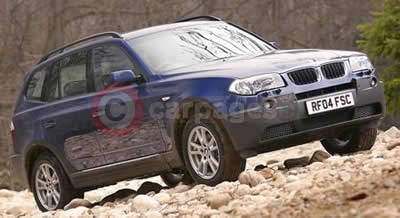 BMW Great Britain is building on the early success of the new X3 model by announcing details of the forthcoming two-litre diesel engined model. Available in standard and SE models, the X3 2.0d will be available in October 2004 priced from £26,175 OTR.

Adding a further dimension to X3 ownership, BMW’s highly praised diesel engine produces 150bhp at 4,000rpm and 330Nm (243lb.ft) of torque at a calm 2,000rpm, power being delivered through a standard six-speed manual gearbox. Accelerating from standstill, 62mph is reached in 10.2 seconds while top speed is 123mph. Yet the X3 2.0d delivers a frugal 39.2mpg on the combined cycle and CO2 emissions of 191g/km.

Differentiating the X3 from all competitors is xDrive – BMW’s new and patented four-wheel drive system. Introduced on the new X5 in late 2003, all new BMW X3 models use the centrally mounted, electronically-controlled clutch to distribute power to the axle with most traction in less than 100 milliseconds. In conjunction with this clutch, BMW’s standard DSC system can reduce power and even brake individual wheels to ensure the car benefits from all available grip. Setting new standards for traction from a 4x4 system, xDrive ensures that any loss of footing, on- or off-road, is dealt with instantly rather than waiting until the car becomes physically unstable.

The DSC system also assists Trailer Stability Control (TSC), which comes as standard with a factory fitted tow bar. TSC monitors any pendulum effect, applying brakes of individual, diagonally opposed wheels of the car if DSC detects undue yaw movement characterised by the vehicle being overly-influenced by its trailer.

DSC also contributes to the Hill Descent Control system (HDC). On steep gradients and with HDC activated, the vehicle’s progress is automatically slowed to walking speed. Alternatively a target speed of between three and 16mph can be selected using the cruise control buttons on the multi-function steering wheel or the brake / accelerator pedals. DSC does this by applying the brakes to individual wheels, stabilising the car on descent and eliminating any risk of the car sliding to the bottom of the slope.

Options include either Business or Professional navigation system, the Professional system featuring map guidance within a dedicated 16:9 pop-up colour monitor. Complementing the X3’s capacious interior and cavernous 480-litre boot is a storage rail system that provides a method of safely transporting two bicycles upright in the boot. Also available is a Panorama Roof, offering a large 0.65 metre square sunroof that benefits both front and rear passengers, with a speed-dependent wind deflector to minimise interior buffeting.

Adaptive Headlights can also be specified, making night driving safer and easier. These respond to steering inputs and swivel by up to 15 degrees, illuminating up to 90 per cent more of the road ahead as well as any previously unseen, potential hazards.

From autumn 2005, a six-cylinder 3.0 diesel derivative will also be available in SE or Sport form, details of which will be announced closer to its introduction.