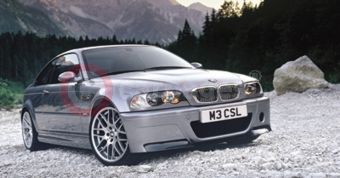 BMW Great Britain has confirmed the planned end of production of the BMW M3 CSL. Produced between June and December 2003, a total of 422 right hand drive cars were produced for the UK market.

The BMW M3 CSL was created by BMW’s M division using the latest lightweight material technology to reduce the overall weight of the car to 1,385 kg, 110 kg less than a standard M3. Engine enhancements to one of the 2003 International Engines of the Year such as re-profiled camshafts, modified exhaust valves and a larger air intake increase engine output to 360 bhp at 7,900 rpm (from 343 bhp). The uprated paddle-shift six-speed Sequential Manual Gearbox changes gear in just 0.08 seconds.

The BMW M3 CSL offers a power-to-weight ratio of 3.85 kg/bhp and a 0 to 62 mph time of 4.9 seconds. Top speed is electronically limited to 155 mph, but holders of a valid racing licence can opt to have the limiter removed.

Contributing to the BMW M3 CSL’s dynamic handling characteristics are the optional Michelin Pilot Sport Cup tyres, with asymmetric treads that were specially developed for the car. Measuring 235/35 ZR19 on the front and 265/30 ZR19 on the rear, the tyres help the car deliver up to 1.6g of lateral grip, compared to 1.2g for the standard BMW M3, itself a car highly praised for its poised handling.

After considerable efforts to eliminate speculators from the waiting list, BMW Great Britain has announced that a very limited number of cars remain unsold. These are available through BMW dealers, priced at £58,455.00. BMW Great Britain is currently planning an M3 CSL track day at the BMW Performance Centre at Rockingham. The event will offer owners and any remaining prospects a rare opportunity to push the car to its limits.