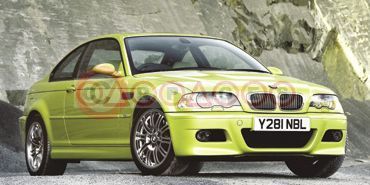 BMW has started 2003 in a similar vein to a memorable 2002 with a 2003 What Car? Award. The BMW M3’s third consecutive year as Best Performance Car caps a great 12 months for BMW that has seen sales records broken, production going from strength-to-strength, future innovations becoming reality and BMW celebrating a number of historic milestones. Records Broken In 2002

For the first time in its history, BMW Group registered over one million cars worldwide, recording a total of 1,057,000 sales. BMW Great Britain’s contribution to this historic event has also broken all records. 85,567 BMWs were registered, of which over 60,000 were 3 Series models – another first. Worldwide, MINI continued its unprecedented success recording a total of 144,000 registrations and was voted the North American Car of the Year. The UK was the largest market for MINI in its first full year of production and, with the introduction of the exciting MINI Cooper S in June 2002, registrations totalled 35,545. Records were beaten elsewhere within the BMW Great Britain network. BMW dealerships sold a record 49,700 Approved Used BMWs including 4,466 MINIs on the MINI Cherished programme, BMW motorcycles broke all previous records registering 4,196 bikes and BMW Financial Services exceeded all expectations, recording over 50,500 retail cases in the UK.

Production And Manufacturing…. At Home And Abroad

Oxford: The international success of the MINI fuelled further investment and jobs at Plant Oxford. Employment rose to 4,500 with the introduction of a three shift, seven days a week, 51 weeks a year working regime. The factory built its 100,000th MINI during May and the 200,000th in December.

Spartanburg: BMW’s production facility in Spartanburg, South Carolina, responsible for all X5 and Z model range production, celebrated its 10th anniversary with the launch of the new Z4 roadster. Since production began in 1992, 193,000 X5s have been delivered to customers worldwide, alongside 280,000 Z3 roadsters, which ceased production in July 2002. The annual Z3 Homecoming was again celebrated, with 512 Roadsters and over 1,000 enthusiasts making the ‘pilgrimage’ back to Spartanburg.

BMW celebrated many anniversaries during the year. 2002 marked 50 years of vehicle production in Munich. It also saw 30 years of production of the 5 Series model. This was celebrated in February 2002 with the current 5 Series winning What Car? magazine’s first ever Lifetime Achievement Award, recognising the car’s seven consecutive Best Executive Car accolades. 30 years of M, BMW’s motorsport division, was celebrated by revealing the forthcoming lightweight M3 CSL.

Innovation And The Future

The FIZ, BMW’s Research and Development Centre in Munich, opened its doors to the future and showed a whole range of technological advances that will appear on BMWs in the coming years. These included Active Steering and an X5 that can reverse park itself – on detecting a space of suitable size using radar, the car reverses and steers itself into the space, only requiring throttle input from the driver. Adaptive Front Headlamps were also unveiled and are due for launch in 2003. Using input from the Navigation System, steering actions and yaw angles, the headlamps adjust direction to ‘see’ around corners.

Motorsport continued to form the heart of the BMW brand, with the BMW Williams F1 partnership gaining further momentum. In September 2002, BMW produced the first non-turbo Formula One engine to top 19,000 rpm in qualifying at Monza, on its way to a record fastest average speed lap. Equally as important as performance is reliability and the BMW Williams F1 team recorded more racing laps than any other competitor – 1,963 out of a possible 2,180.

BMW’s Technology Office in Palo Alto, USA combined with helmet manufacturer, Schuberth, to design and develop a miniature 6 x 8 mm head-up display to project vital driver information onto the driver’s visor. This revolutionary design is being tested in the closed season prior to use in 2003 and is also being used on the ocean by the Oracle BMW Racing crew as it challenges to win the Louis Vuitton Challenge which precedes the America’s Cup.

BMW Mobile Tradition, the department responsible for the company’s heritage, launched its own hire car department. This is a world-first opportunity for customers to hire cars directly from a manufacturer’s private collection. Enthusiasts have the opportunity to hire eight models:

If in doubt check with your local BMW dealer as car prices and technical data will have changed since 2003.