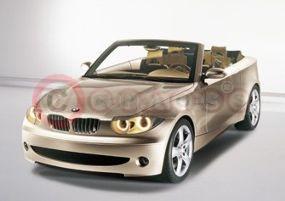 BMW is set to pull the wraps from a new concept car at the Geneva Motorshow on 4 March 2002. Dubbed the CS1, it offers the first glimpse of BMW's design philosophy when applied to a small car, indicating possible future exterior styling themes for a model of this size - in this case a four-seater convertible.

A new look The CS1 is not simply a shrink-to-fit version of any other BMW model, but has its own unique look. In the future, each BMW model series will have a clear identity, which sets it apart from other cars in the line-up, while still retaining design features which make it instantly recognisable as a BMW.

Short overhangs front and back - typical of BMW - the sleek lines of its flanks and the sculptured sills, give the CS1 an elegant, yet dynamic look. Large, 18 inch, five spoke alloy wheels reveal the brake discs which lie behind.

A powerful shoulder line running along the sides and across the rear gives the car muscularity and the aggressive nose, with a deep air dam, alludes to the car's sporting intent. Twin, wrap-around headlamps feature the ring-shaped running lights, which have become a popular feature of the 5 and 7 Series.

At the rear, double circular lights are illuminated by LEDs and act as the indicators and brake lights. The surrounding light area is set back and illuminated from behind to perform the tail-light function and gives the units a three-dimensional look.

Making use of modern, lightweight materials like neoprene and matt-finished aluminium, the interior of the CS1 is a completely new take on the car interior. Self-supporting surfaces appear to float in the cabin, giving a feeling of space and light. Fine aluminium structures, covered with neoprene (the material used to make wet suits), form part of the cabin structures. A central spine runs down the middle of the car, dividing front and rear seats and at the front "wings" branch off it under the dashboard.

An aluminium crossbar forms the dash and neoprene-covered dome structures rise above it, the undersides of which are coloured flame orange, to give a glow to the space below. In front of the driver, the speedometer and rev counter are attached to the steering column, under another curved cowl.

The other main material used is soft brown nappa leather, which features wherever the driver or passengers come into contact with the car - on the steering wheel, head rests and seat cushion. The side bolsters are in more robust Nubuk leather. Soft, semi-transparent materials used in some of the door fixtures add to the feeling of light.

First seen on the new BMW 7 Series, iDrive is an ergonomic design philosophy which dramatically simplifies the car's control systems. The primary controls needed to drive the car are all within a finger's reach of the steering wheel and the major secondary controls are on the dashboard.

The remainder are all operated using the large circular knob, positioned just behind the gear selector on the centre console, called the Controller. By pressing once on the Controller, the driver of the CS1 activates the system and a display screen rises into view, out of the aluminium dashboard.

At the heart of the CS1 is BMW's four cylinder VALVETRONIC, 1.8 litre petrol engine, built at Hams Hall in the West Midlands. It develops 115 bhp and 175 Nm (129 lb ft) of torque. VALVETRONIC is BMW's unique variable valve lift system which uses the intake valves to control the flow of fuel/air mixture into the cylinders. The result is a better spread of power and torque and increased fuel efficiency.

Paddles mounted on the steering wheel are used to change gear via BMW's SSG Sequential Sports Gearbox) as available for the 3 Series Coupé. The clutch is operated electromagnetically, so there is no clutch pedal. Gearshifts take a fraction of a second. In slow city traffic the driver can choose the self-selecting mode, which allows the system to select the correct gear automatically.