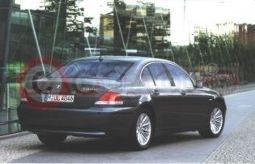 March 2003 will see the introduction of the BMW 730d to the UK following the launch of the V8 735i and 745i models in March 2001. This will be the first time that BMW has launched a 7 Series diesel model in the UK. Pricing will be confirmed later this year.

Featuring second-generation common rail fuel injection, the 730d’s straight-six engine develops a maximum output of 218 bhp at 4000 rpm, with maximum torque of 369 lb-ft between 2000-2750 rpm. Top speed is 146 mph and 0-62 mph is reached in 8.0 seconds, giving it a performance advantage over the only competitor in this segment, the Mercedes S 320 CDi. The 730d is also the world’s first diesel car to feature a six-speed automatic gearbox.

Despite its class leading performance the 730d also has competitive running costs. Capable of delivering 33.2 mpg on the combined cycle there is also the option of Concours, BMW’s unique five-year servicing package costing just £500.

BMW’s second-generation common rail technology with significantly higher fuel injection pressure is responsible for the 730d’s increased performance and economy. Power has been increased to 218 bhp for the 730d compared to 193 bhp for the 530d, an increase of 25 bhp. In order to achieve this, maximum injection pressure has been increased from 1350 to 1600 bar, which, in conjunction with the new geometry of the combustion chamber, ensures more power and torque, lower fuel consumption and cleaner emissions.

7 Series in the UK

Since its launch in March 2002 until the end of June, BMW V8 7 Series models have outsold the combined sales of the V8 Mercedes S Class models, Lexus LS430 and Audi A8 V8 models. With the introduction of the 730d next year BMW has a clear opportunity to increase sales significantly. Diesel models have become increasingly important in all sectors of the UK market. For example, the Mercedes-Benz S 320 CDi represents over 50 per cent of S Class sales while V8 engines are responsible for just 16 per cent. This points towards a major volume opportunity for BMW 730d.