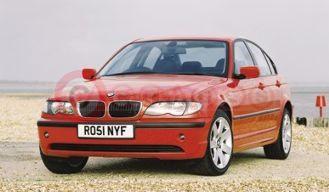 Britain's most popular prestige compact executive car, the BMW 3 Series, has been refreshed and improved for the 2002 model year. The changes are sufficient to warrant the title 'new car' with two brand new four cylinder engines, extensive chassis changes, improved standard specification and, for the Saloon and Touring models, discreet new styling.

In short, BMW has not let the grass grow under the wheels of its class-leading range. "Many manufacturers would have been satisfied with the 3 Series just the way it was," said Jim O'Donnell, Managing Director of BMW Great Britain. "In fact 2001 will be an all-time sales record for the evergreen 3 Series.

"But at BMW we constantly strive to offer more to our customers and the new look 3 Series, with economical new petrol and diesel engines, an even more dynamic chassis and higher specification will be a hard act to beat" he concluded.

All 3 Series Saloon and Touring models have received subtle exterior changes: BMW would not call it a facelift since the 1998 3 Series was hardly old enough to have suffered from facial ageing. The changes, however, do mark a growing distinction between the various body styles in the range which began with the new Compact.

New curved headlights, incorporating the indicators behind clear glass, and round fog lamps are all distinctive new features. A wider kidney grille leads into a newly styled bonnet 'powerdome' which runs right up to the A-pillars and the new swage line on the front wings, with a teardrop shaped repeater indicator, adds a greater sense of muscularity and purpose to the face of the 3 Series Saloon and Touring.

A new front air dam for both ranges, and a new rear valance and revised rear light cluster for the Saloon, complete the exterior changes.

Whilst these fresh exterior changes are discreet and subtle, the engineering changes beneath the skin of all 3 Series models are revolutionary.

BMW's best-selling model, the 318i SE, is the beneficiary of a new two litre, four cylinder, 16 valve engine featuring BMW's revolutionary VALVETRONIC technology. This is the second engine in the new generation of BMW fours with VALVETRONIC and is built at BMW's newest engine plant at Hams Hall, Warwickshire which opened in February 2001.

VALVETRONIC, which has already received an 'Engine of the Year' award from Engine Technology International, removes the need for a throttle butterfly and controls valve lift infinitely to control the fuel air mixture supply. The principle is similar to a human breathing - we breathe deeply when exerting ourselves and in a more shallow pattern when taking things more gently. It is the same with VALVETRONIC.

The real benefit is an engine which produces 21.2 per cent more power than its predecessor, 11.1 per cent more torque and an 11 per cent improvement in fuel economy. Carbon dioxide emissions are down to 175 g/km.

Everyone's a winner with the new 318i models (Saloon, Touring, Coupé, Compact and a new Convertible)?.except the fuel companies and the taxman.

Yet the 318i now travels 39.2 miles on every gallon of fuel on the combined EU cycle which is up to 15 per cent more economical than its competitors.

A new four cylinder diesel too

Not satisfied with one ground breaking new engine, BMW engineers have extensively revised the four cylinder, 16 valve diesel unit in the 320d. Available in Saloon, Touring and Compact guise, the new engine delivers over ten per cent more power, 17.9 per cent more torque and a fuel consumption improvement of 3.6 per cent over its already parsimonious predecessor.

This remarkable engine produces 150 bhp (the same as the two litre six cylinder petrol engine of 1998) and 330 Nm (243 lb ft) of torque which delivers a hot hatch 0-62 mph acceleration of 8.9 seconds and a top speed of 134 mph. Its real coup however is the tidal wave of torque (more than a Porsche Boxster and not that far off a Ferrari 360 Modena) which provides incredible on-road flexibility - 50-75 mph in fifth gear takes only 7.5 seconds.

Despite its surprising performance the 320d returns an EU average fuel consumption of 51.4 mpg, whilst extra urban cruising allows 64.2 mpg. Equipped with a 13.9 gallon tank, the out-of-town range is a staggering 893 miles - enough to drive non-stop from Calais to Nice with 126 miles for a drive up the Grand Corniche to Italy.

The miracle of Munich's engineers

The secret of the 320d's performance lies in the new second generation, high-pressure common rail fuel injection system that operates at 1600 bar. This is a first for a large scale production diesel engine. Together with a volume-controlled fuel pump, a new Digital Diesel Electronic engine management system, twin balance shafts and an improved Variable Valve Turbocharger, the 320d has what amounts to an entirely new engine.

All 318i and 320d models are supplied with five speed manual gearboxes as standard equipment that provides service-free lives. As an option (and for the first time on BMW's four cylinder diesel) a five speed automatic transmission with adaptive learning and Steptronic (ie manual control) action is available.

For the 325i and 330i Saloon and Coupé models, BMW will offer a Sequential Sports Gearbox (SSG) as a further drive option.

SSG is an automated manual gearbox with, as its name suggests, its gears selected in sequential pattern, like those on a motorcycle. It is the product of Formula 1 technology and enables the driver to select gears with a flick of the gear lever, via paddles behind the steering wheel, or lets the gearbox select the gears itself in automatic mode. There is no clutch pedal so a car equipped with SSG is a 'two pedal car'.

'C', or 'Cruise' mode, is an automated programme ideal for use in a city environment to take away the stress and strains of urban traffic. But it is not intended as a substitute for the automatic gearbox - the torque converter of which will always offer a higher level of comfort.

Once out of the city, touching either the gear lever or a paddle activates the manual selection mode and, at a stroke, the driver can emulate Juan Pablo Montoya on the back roads !

The whole system is failsafe (ie the driver cannot change down from fifth to first gear at 70 mph) and it delivers satisfying throttle 'blip' down-changes to remind the driver how it should be done.

The poise and balance of the BMW 3 Series has been highly praised since its launch in 1998. However, customer feedback has revealed a desire for slightly more sporty settings and BMW has listened.

The answer is thoroughly revised suspension settings for the springs and dampers whilst stiffer rubber mountings for the suspension to body have enhanced the package. Even more agility and 'feel' has been dialled into all 3 Series models. (Note: the new Compact and 330i/Ci models have had these changes since launch in April 2001)

The more sporting suspension settings have been complimented by a faster, more direct steering rack that now requires only three turns from lock to lock.

High residual values, low 'whole life 'costs, good fuel economy and low service costs make BMW not only an affair of the heart but also a choice of the head. This is particularly true of the 3 Series range, which is now in its fifth generation.

BMW identified a market for a compact sporting saloon as an alternative to the humdrum family charabancs back in 1966 and introduced the 1602. Since that time demand for 3 Series models has grown consistently, a fact that hasn't entirely escaped almost every other car manufacturer. Leaders attract followers and a host of imitators have tried to emulate the 3 Series recipe. The fact that BMW has not sat on its laurels and has pursued a policy of continuous improvements is symptomatic of the company's pioneering spirit.

A new competitive battleground is certain to be CO2 emissions.

The new company car benefit tax regime, that comes into effect in April 2002, will place great focus on carbon dioxide emissions which are a direct product of fuel consumption. The complex 21 band structure will increase benefit taxation for high business mileage users and reward drivers of fuel efficient cars. Since around 75 per cent of 3 Series drivers are business users, this is an important topic.

No one in the industry can predict exactly how the shape of the market will change but Graeme Grieve, BMW Great Britain's Sales Director, is confident that BMW is well placed to benefit.

"We have a range of highly fuel-efficient cars which largely out-perform our competitors in this respect. The new 318i and 320d are supremely well-suited to this new tax regime," he explained.

No, it's not a desperate sales offer but simply the saving which can be made by selecting a BMW 318i SE instead of a Mercedes C180 Avantgarde. Over three years a 40 per cent tax-paying company car driver will pay £7,990 for the privilege of driving the Mercedes (which has CO2 g/km rating of 225), compared to just £4,739 for the BMW 318i SE (which produces just 175 g/km of CO2).

The saving for the BMW driver compared to the Mercedes is £90.31 each month for three years - a case of good claret or membership of a golf club?or a contribution to Gordon Brown's coffers? That is the question that company car drivers are going to have to start asking.

So will drivers eschew the company cars and take the cash ??if it is offered? "I believe this will have a greater impact on the volume manufacturers than on us" claimed Grieve. "The trend in all markets, not just cars, is towards greater individualisation - in other words towards premium products."

"If people choose cash instead of car there is a good chance that BMW will be at the top of their personal shopping lists," he concluded.

The already high standard specification of the 3 Series has been enhanced for the new model year: six cylinder models all have DSCIII (Dynamic Stability Control), and four cylinder, non-SE models now have manual air conditioning, both as standard. New alloy wheels are fitted to four cylinder Saloon and Touring SE models (16 inch) and 17 inch to 330i and 330d models (17 inch).

New colours and new upholstery and interior trims round off this comprehensive change for the 3 series range.

"Everyone is a winner with the new look, 2002 model year 3 Series," said Jim O'Donnell, "company car drivers, professionals, retirees or simply young people who enjoy driving. There is something for each of them and I am confident that a record 3 Series year in 2001 will lead to another in 2002" he concluded.

If in doubt check with your local BMW dealer as car prices and technical data will have changed since 2001.