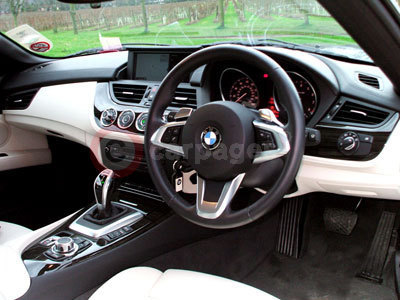 The BMW Z4 sDrive35i is the top of the range, priced at £37,065 and worth every penny. In fact in a game of guess the price, I got it very wrong, thinking it was around £20,000 more expensive. The extra £4,400 over the 30i buys some special, 17-inch alloys, brushed aluminium interior trimmings, chrome garnishing to the front grille and matt aluminium air-intake slats together with electronic seat adjustment with memory functions for the driver.

It also has a 3.0-litre engine but this unit does have a turbo - two, in fact, along with High Precision Injection. The gearbox option in this case is a 7-speed Double Clutch Transmission (DCT) with steering-wheel-mounted paddles and launch control for just £1,810.

The DCT system was in the BMW Z4 test car and, as expected, the gear changes were very smooth, both in fully automatic and the mix and match paddle and sequential shift. Not only that, but the 7-speed transmission makes the car slightly faster than the standard version.

The 0-62mph sprint is just 5.1 seconds instead of 5.2 seconds; however, the top speed in both cases is electronically limited to 155mph. The engine outputs 306PS (225kW) at 5,800rpm and no less than 400Nm of torque between 1,300 and 5,000rpm. It starts way down in diesel territory because one of the turbos adds boost at lower speeds and the other comes in at a later stage. So good is this engine that it has been voted Engine of the Year, twice.

Despite appearances, the EfficientDynamics ethos applies to the BMW Z4, too; the highlights of which are tailored to suit each engine. The result is seen in the fuel consumption figures, which are better than they have a right to be. Those for the test car are posted as; 22mpg for the urban cycle, 41mpg for the extra-urban and 31mpg for the combined with a CO2 emission rate of 210g/km.

There are three settings to the Dynamic Drive Control, all available at the push of a button. Normal is just that and likely to return somewhere near the official fuel economy figures. Sport offers more direct steering and quicker responses to the accelerator pedal suspension while Sport+ activates the Dynamic Traction Control system allowing for a bit of controlled drift on bends.

All in all, the balance and suspension is superb. The steering might be quite as focussed as some others of this ilk but it is by a minor degree. The agility and dynamics will have you grinning, in accordance with the 'maker of joy' slogan and, if you go and take a test drive, within seconds you'll be saying to yourself, "it really shouldn't be this easy"

If in doubt check with your local BMW dealer as car prices and technical data will have changed since 2009.