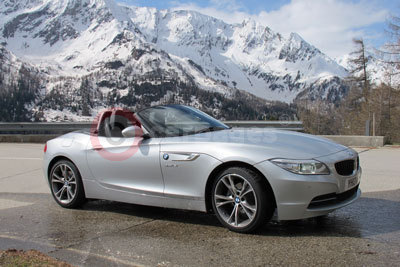 In BMW vocabulary Z has always meant two-seater sports roadster, and the latest Z4 continues the theme, but with one big difference. It is no longer a soft-top with a fabric hood like all its predecessors. Instead, the Z4 has gone high-tech with an electrically-operated folding hard-top roof. This is a key change which aims at morphing the Z4 into an even more desirable car with wider appeal, going the same route as many other modern convertibles. It also a bit bigger than before, with a roomier cabin and a new feature: dial-able chassis settings to let you tailor the car to drive just the way you want it to.

Visual changes to the Z4 include revised front end styling with a prominent V sculpted on the bonnet, flowing back from the familiar blue-and-white propeller badge on the nose above BMW's characteristic flared-nostrils grille. The A-pillars are now painted black to make them less visually prominent and give the car a lower, sleeker look. Boot space is good with the roof up, but inevitably compromised when the top concertinas down into some of its area.

The new Z4 comes with a choice of engines ranging from a four-cylinder two-litre to a six-cylinder three-litre. The line-up starts with the sDrive18i, the base model with a new engine, and the one we chose for this test as the most affordable model in the range. Don't be fooled by the badges, it is not a 1.8 litre motor nestling in there under the long bonnet, but a two-litre one, a 154 bhp turbocharged petrol unit.

Next up on the range ladder is the sDrive20i, the likely best-seller, with a more powerful version (181 bhp) of the same four-cylinder, two-litre engine Then there is the sDrive28i, again the same core engine with even more power (242 bhp). Topping the range are two six-cylinder, three-litre models, the sDrive35i (302 bhp) and the flagship sDrive35is (335 bhp). This quickest version has a supercar 0-62 mph acceleration time of 4.8 seconds. Transmissions are six-speed manual gearbox or eight-speed auto.

The engine in our test car is a new one in the range for 2013, and it's effectively a mildly detuned - by 27 bhp - version of the two-litre engine in the Z4 sDrive20i that BMW expects to be the best-selling version of the new Z4. Even this lowest-price model is a very decent performer, with an engine that packs a 154 bhp punch and delivers a healthy 177 lb ft of torque. The top speed is 137 mph and the 0-62 acceleration time is 7.9 seconds. The CO2 emissions output is 159 g/km, putting it in band G for road tax, and the combined average fuel figure is 41.5 mpg.

We drove the Z4 on an unusually long test route, some 1,200 miles from Tuscany to London. With some fast motorway stretches, Alpine ascents, lots of snaky B-roads and the roof down most of the way, the fuel consumption fell well short of the official figure. Unsurprisingly so, as government fuel figures are notoriously optimistic of actual real-life results. Even so, the final figure of 31.3 mpg on our extended test trip was respectable for such a long, hard drive through six countries.