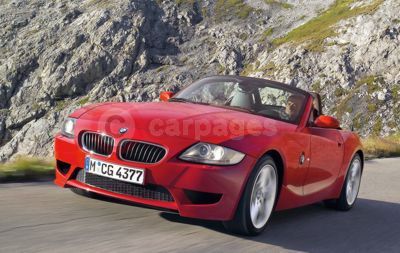 BMW UK has announced details of the latest M car - the new BMW Z4 M Roadster. Three-years after the Z4’s launch as the most performance-focused roadster on the market, BMW M has turned their attentions to the Z4, creating BMW’s fastest accelerating open-top. With 343hp equating to 106hp per litre, zero to 62mph acceleration of 5.0 seconds and an electronically limited top speed of 155mph, the new M Roadster is set to re-write the rulebook for performance, agility and dynamism.

The new BMW Z4 M Roadster Like the current BMW M3 Coupé and Convertible, the new BMW Z4 M Roadster features the five-time International Engine of the Year. The reigning three to four-litre champion delivers 343hp at 7,900rpm and 365Nm of torque at 4,900rpm from its 3,246cc six-cylinder Motorsport engine. The powerplant is mated to a six-speed manual gearbox and BMW M’s variable M differential. The result is excellent stability and traction, especially when accelerating out of bends.

Unlike the ‘standard’ Z4 that uses an electromechanical steering system, the new Z4 M Roadster uses a hydraulic power assistance system. The ‘standard’ car also uses Run-flat tyres as opposed to the M Roadster’s non-Run-Flat items - both features that M, as a separate division, believes give the car its own ‘M’ character. These features are reinforced by BMW M’s floating compound high-performance braking system, originally conceived for the BMW M3 CSL, resulting in a 62mph to zero stopping distance of just 34 metres.

Visually, the new Z4 M Roadster is differentiated from the ‘standard’ car by numerous details inside and out. From the front, the lower valance, large air intakes and dual styling lines on the bonnet clearly identify the M car while, at the rear, BMW M’s trademark quad-tailpipes and aerodynamic diffuser highlight the car’s potential. The M-styling is finished off with exclusive M double-spoke 18-inch alloy wheels with 225/45ZR18 tyres on the front and 255/40ZR18s on the rear.