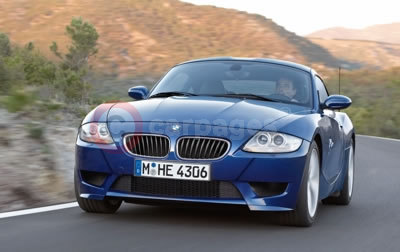 BMW UK has announced final specification and pricing of the forthcoming BMW Z4 3.0si Coupé and the new BMW Z4 M Coupé. The new Z4 Coupé is due to start production at BMW’s manufacturing facility in Spartanburg, South Carolina, USA in April 2006 with customer deliveries starting in August 2006.

The new high-performance BMW Z4 M Coupé generates 343hp and 365Nm of torque from its 3.2-litre straight-six cylinder engine. Maximum power is generated at 7,900rpm while 80 per cent of the maximum torque is available from 2,000rpm.

The renowned power and flexibility of the ‘M’ engine contributes to a zero to 62mph time of 5.0 seconds and propels the car to an electronically limited top speed of 155mph. Power is transferred to the road via a six-speed short-shift manual transmission.

Key to the purity of driving dynamics and handling characteristics of the Z4 Coupé is its exceptionally stiff body structure of 32,000Nm/degree. The suspension of the new Z4 M Coupé is largely the same as the recently announced BMW Z4 M Roadster, apart from the spring and damper settings that take account of the different weight distribution of the fixed head car. The chassis and suspension also share many common features from the benchmark BMW M3 Coupé, such as the M variable differential and compound brake system taken directly from the M3 CSL. Also in common with the forthcoming Roadster, the new Z4 M Coupé rides on unique, lightweight Z4 M alloy wheels shod with 225/45 ZR18 tyres on the front and 255/40 ZR18 tyres on the rear.

From the outside, there is no mistaking the new BMW Z4 M Coupé with its purposeful stance. The roof of the two seater is contoured for added headroom. From the sides, the long bonnet accentuates the dramatic styling with occupants set back in true sports car style. Owners can personalise their new BMW Z4 M Coupé with a choice of three exclusive M colours and five ‘standard’ colours.

From the front, a deep front air-dam with distinct x-shaped lines differentiates the ‘M’ car from the 3.0si. Large air scoops in the valance and two precision lines running along the bonnet signal the car’s performance credentials. Xenon headlamps and BMW’s unique corona light rings also accentuate the dynamism of the front view.