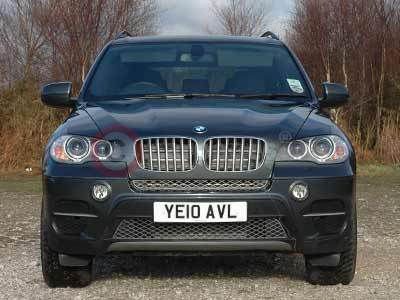 The BMW X5 was first launched in 1999 and it quickly set the benchmark for four-wheel drive performance and handling. BMW even introduced the acronym of SAV (Sports Activity Vehicle) rather than SUV (Sports Utility Vehicle) as used by other manufacturers.

Since 1999 the BMW X5 has built up a loyal fan base of driver's who are looking for all the practicalities of a four-wheel drive combined with the handling of a 'sports car'.

The new BMW X5 went on sale in the UK in June 2010 and it incorporates an array of design and engine changes offering even greater performance and lower emissions, whilst also updating its look.

There are also two diesel engines available - the 30d is equipped with a 2,993cc turbocharged diesel engine that produces 245hp and is capable of 0 to 62 mph in 7.6 seconds with a top speed of 130 mph. The 40d features the same engine except there are two turbochargers and a higher output of 306hp which enables it to complete the 0 to 62 mph sprint in 6.6 seconds and continue on to a top speed of 147 mph.

We tested the BMW X5 xDrive 40d SE which was equipped with the new 40d engine which is the replacement of the twin-turbocharged xDrive 35d. With the introduction of the new xDrive 40d we see an improvement in emissions of 10 per cent, emitting only 198g/km CO2 whilst delivering 37.7 mpg on the combined cycle. The performance has also increased.

Until the engine warms up you will notice some diesel chatter but it does quieten down. There can be a fractional delay when pulling off but the engine soon makes up for this when on the move and we found the flexible diesel engine quite potent and should the mood take you there is ample power for quick, clean overtaking.

You cannot specify a manual transmission and all BMW X5's are equipped with an eight-speed automatic transmission with electronic gear selector and Steptronic. You can shift gear manually should you wish via the tunnel mounted gear lever selector or via the two paddles on the back of the steering wheel. You simply knock the gear lever forwards to change down or back to change up - simple and quick. Personally the novelty does wear off and you tend to leave the transmission in the fully automatic mode but if you get the revs right and change down at the right moment you have a very powerful vehicle when overtaking (not that it is that bad in its auto mode).

In summary we liked the engine and this is the option we would choose.