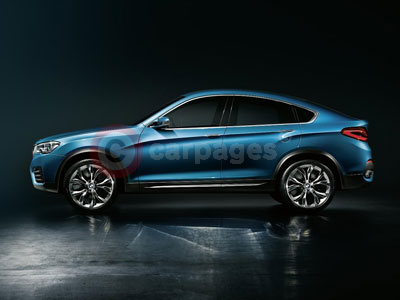 BMW have released details of their X4 Concept, which is due to go into production in 2014 – it obviously taking its design cues from the larger production BMW X6. The X4 takes the blend of Coupe styling as with the X6 and turns it into a SUV or as BMW prefer a Sports Activity Vehicle.

BMW have made a success of their ‘X’ model line-up with one in four new BMW cars being from the ‘X’ stable and the X4 is likely to build on that success.

The coupe-style roofline sweeps downwards and making the X4 appear longer. Below, the windows extend well to the rear, where they are bordered by a dynamic interpretation of BMW’s signature Hofmeister kink. There are full-LED headlights with a hexagonal interpretation of the familiar BMW twin circular appearance. LED tail lights positioned at the outer edges of the rear designed to emphasise the muscular wheel arches and wide track.

We do not have any more details than this at this stage – but we would expect the entry-level BMW X4 to be priced around the £33,000 mark with engines, probably all diesel being borrowed from the current X3 line-up.

BMW X4 Images may not be UK specification cars. Colours and exterior and/or interior elements may differ from actual models.