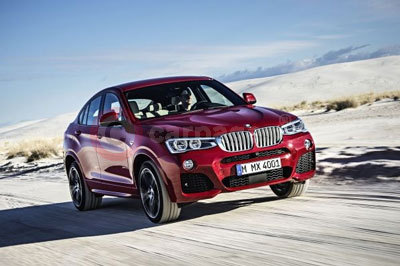 Based on the platform of the current X3 the X4 takes its styling cues from its bigger brother the X6. It is 14mm longer than the X3 and 36mm lower with the front seat occupants 20mm lower and the rear some 28mm lower than those in X3. There is a bench seat in rear, so that the X4 can accoomdate five. The rear seat splits on a 40:20:40 is reveal a boot that can carry between 500 and 1400 litres.

From launch there will be a choice of three diesel engines, the xDrive20d a 2.0 litre unit producing 190 hp / 400Nm of torque. This equates to 0-62 mph time of 8 seconds via its standard six-speed manual gearbox, you can opt for an eight-speed automatic. With the auto fuel consumption on the combined cycle is 54.3 mpg and CO2 emissions 138 g/km.

Auto Start- Stop, Brake Energy Regeneration and on-demand operation of the ancillary units are standard across the range.  Optionally available are 17-inch aero wheels with reduced-rolling-resistance tyres, which reduce the CO2 emissions of the BMW X4 xDrive20d and xDrive30d by a further 7g/km.

This is a 7-year+ news article, from our BMW archive, which dates back to the year 2000.

If in doubt check with your local BMW dealer as car prices and technical data will have changed since 2014.

BMW X4 Images may not be UK specification cars. Colours and exterior and/or interior elements may differ from actual models.