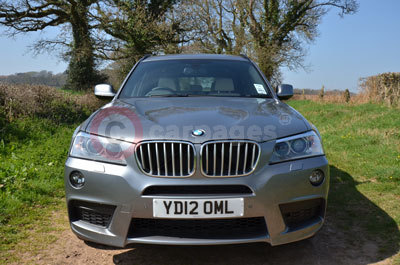 It is marketed by BMW at the family buyer and has always been seen as the X5’s little brother.

BMW now have a range of sports activity vehicles ranging from the X1 through to the X5 and the X6.  And their expertise has grown with the range, which is good news as the X3 has to take on the likes of Range Rover’s Evoque and its main competitor the Audi Q5 – the stakes have risen – and hopefully BMW can rise to the challenge.

The eight-speed automatic gearbox is a joy to use and changes are pretty much seamless, although it did get caught out on a couple of occasions. You can should you wish change manually and there is a sport mode but to be honest we let the X3 take care of these matters itself most of the time.

The combined official fuel consumption figure is quoted as 47.1 mpg, where the CO2 emissions are 159 g/km which considering the performance is very respectable. The xDrive30d is fitted with Auto Start-Stop technology which automatically switches the engine on/off when at rest in stop/start traffic to aid fuel consumption and CO2 emissions. Usually with manual cars we find auto Start-Stop at bit disconcerting but with X3 it simply works without any driver input.

On average we achieved 34.3 mpg, which improved to the mid- forties on the motorway, which considering the performance we cannot grumble about.

Overall we were very impressed by the xDrive30d power plant.