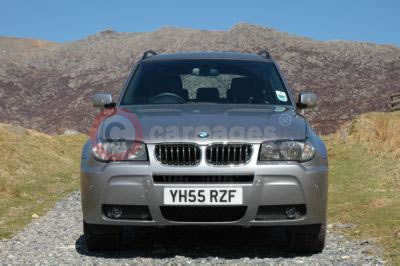 Introduced four years after the very successful X5, the BMW X3 made its debut in May 2004.

Should you not be aware the BMW X3 is a sports utility vehicle (SUV) or in non-marketing speak a 4x4. I believe BMW prefer the term sports activity vehicle - with the emphasis on activity.

Unlike its larger brother the X5, the X3 is a more agile compact SUV, targeted at the more affluent Land Rover Freelander owner. BMW believe that it will introduce more women and a younger audience to the BMW stable. We were interested to see that BMW’s own research states that 20% of X5 owners use their SUV off road more than once a month, with the belief that this will be same for X3 purchasers. BMW are predicting that they will comfortably be able to sell 10,000 cars a year in the UK.

The X3 is blessed with a wide range of engines starting with a 2.0 litre diesel, ranging through two petrol engines 2.5i and 3.0i - up to the potent six cylinder 3.0d litre diesel.

When first launched in May 2004 there wasn’t a diesel variant available until later in that year, when the 2.0d was introduced to the X3. In September 2005 the line up was joined by a 2.0i petrol engine and a 3.0d diesel engine.

We drove the 3.0d, which is the same 2993cc six cylinder diesel powerplant that is seen in the BMW X5. The 218 bhp turbo charged diesel engine produces a healthy 500Nm of torque at only 1750rpm. For those of you interested in its green credentials, the CO2 output is measured at 210g/km and it fitted as standard with a (DPF) diesel particulate filter.