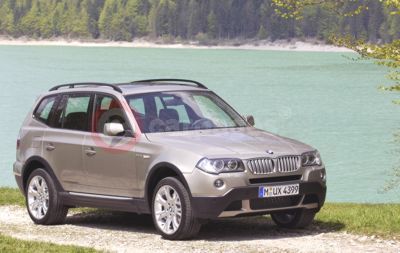 BMW is pleased to announce the launch of a revised X3, featuring the most powerful diesel engine ever to power a production BMW in the UK. The revised X3 features two new petrol engines and is set to take the Sports Activity Vehicle sector by storm.

Due to go on sale in the UK in September, the BMW X3 offers buyers the very latest in engine technology. BMW’s premium SAV now comes powered by a total of five different engines - two petrol and three diesel units.

The headline-grabbing powerplant is a twin-turbo 3.0-litre diesel with an output of 286hp and 580Nm of torque that has been developed from the engine used by the BMW 535d. Such power places the X3 3.0sd into the realm of sports car acceleration courtesy of a zero to 62mph time of 6.6 seconds and a 149mph top speed.

What sets the X3 3.0sd apart from previous X3s is that it comes equipped with the same twin-turbo technology that has already been showcased in the BMW 535d. By using two turbochargers, one smaller one larger, the X3 3.0sd offers high levels of low down pulling power as well as top end performance. It can do this because the smaller turbo boosts at low revs for instant, smooth and swift acceleration, but as engine speed builds the larger turbocharger comes into play to continue the rapid progress. The result is an engine that develops peak torque from just 1,750rpm through to 2,250rpm, but is capable of continuing to rev up to 4,400rpm – an unusually high limit for a diesel.

Completing the triumvirate of new six-cylinder engines to the X3 are a 2.5-litre 218hp petrol unit and a new 272hp 3.0-litre petrol engine. Both of these powerplants are based on the world’s lightest production six-cylinder engine constructed of aluminium and magnesium alloy. The smaller capacity engine can power the X3 from zero to 62mph in 8.5 seconds before going on to a top speed of 137mph. The higher output 3.0-litre engine reaches 62mph from zero in just 7.5 seconds before attaining a top speed of 142mph.

For those new car buyers looking to balance performance with economy, two other choices of engine are offered. A 150hp 2.0-litre diesel represents the entry point of X3 ownership. Further up the scale the existing 218hp 3.0-litre diesel engine is also offered.

The introduction of a new X3 isn’t just a story of new engines. BMW’s designers have subtly altered the car to freshen its appeal. At the front a larger kidney grille sits above a redesigned front bumper and spoiler. On the new car a colour-coded spoiler with vertical uprights is positioned below the dark swathe of the bumper, while the front foglights are now incorporated into the main section of the bodywork. The X3 3.0sd rides on 18-inch light alloy wheels as standard while larger twin exhaust pipes protrude from under the rear valance.

The side profile remains true to the original X3, but the new rear light clusters feature rods of LED lights. The styling of the rear bodywork has also changed with colour-coded panels now extending lower down the bodywork.

Inside, the driver can get to grips with a new style of three-spoke steering wheel while enhancements to the type of materials used on the centre console have also been included. Again, the owner of a X3 3.0sd gets special treatment with stainless steel foot pedals to underscore the performance nature of the vehicle.

To aid performance and safety the new BMW X3 features the very latest traction control system allied to xDrive, BMW’s unique four-wheel drive system. For the first time on a BMW X model BMW’s innovative Dynamic Stability Control + (DSC+) system is fitted as standard. In addition to the all round traction control benefits of such technology, DSC+ on the X3 comes with four additional features aimed at improving safety:

Brake Pre-tensioning shortens stopping distances during an emergency stop by priming the brakes should the driver lift off the accelerator sharply in preparation. Brake Drying improves braking performance in the wet by periodically applying the brake pads to scrub away the film of water that can build up on the brake discs. Hill Start Assistant allows a manual transmission car to pull away smoothly on a gradient without rolling backwards, courtesy of the brakes being held for the short time it takes the driver to apply the accelerator after releasing the foot or handbrake. Brake Fade Compensation applies additional braking without any extra effort from the driver should sensors detect that the brake pads are starting to lose ‘bite’ due to heat build up.

In another first on an X model the driver will now be able to select the Dynamic Traction Control (DTC) function of DSC. DTC allows for a greater degree of wheel slip for more spirited driving without the main traction control system safety net intervening. This option can be selected via a button on the centre console.

Prices and full specification of the new X3 will be announced before its on sale date in the autumn.