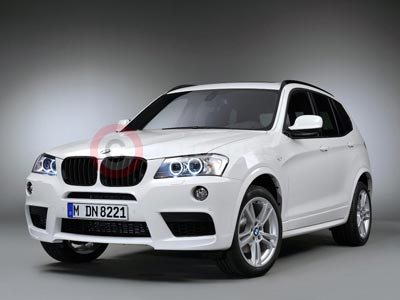 Only weeks after its market launch, the new BMW X3 has already been hailed "Off-Roader of the Year". The new BMW X3 has made an instant and lasting impression on fans of all-wheel-drive vehicles: readers of Germany's Off Road magazine voted it their favourite in the "SUV" category.

This accolade sees the new BMW X3 following in the tyre tracks of its predecessor model, which was voted "Off-Roader of the Year" twice in succession - in 2006 and 2007. The latest Off Road reader poll also conferred outstanding rankings on two other BMW X models: the BMW X6 Sports Activity Coupe was runner-up in the "Crossover" category while the new BMW X5 came third among the "Luxury Off-Roaders".

This triple success for the family of BMW X models is further proof of just how attractive and popular a vehicle concept it is. Its triumphal career began in 1999 with the unveiling of the first-generation BMW X5, with which BMW called into being the Sports Activity Vehicle segment. This was soon followed by both the first BMW X3 and the BMW xDrive intelligent all-wheel-drive system. Its electronically controlled drive distribution not only made for surefooted traction and maximum stability on slippery surfaces, but superior dynamics on the road as well, creating a unique rendition of hallmark BMW driving pleasure. With the BMW X6 and the BMW X1, this concept found its way into further vehicle segments. Both models remain unrivalled in the competitive field of premium automobiles.

By contrast, the new BMW X3 joins a segment that is already inhabited by other premium carmakers as well. Thanks to its systematically honed qualities, however, the BMW X3 once again sets benchmarks within that category - a fact reflected in its being voted "Off-Roader of the Year". The engines available for this Sports Activity Vehicle deliver superior performance and, thanks to BMW EfficientDynamics, exemplarily low fuel consumption and emission figures as well. In spring 2011 the engine portfolio comprises two petrol and two diesel engines with output ranging from 135 kW/184 hp to 225 kW/306 hp. Depending on the choice of engine, the new BMW X3 features an eight-speed automatic transmission either as standard or as an option. All-new suspension technology brings with it a palpable improvement in agility and ride comfort compared with the predecessor model.

With luggage capacity that can be extended from 550 to 1, 600 litres and a folding, 40:20:40-split rear seat backrest the new BMW X3 boasts the greatest available space and flexibility in its segment. It also comes with a choice of innovative equipment features, driver assistance systems and mobility services from BMW ConnectedDrive that is unique among the competition. As an example, the new BMW X3 is the only model in its class that has the option of a Head-Up Display and allows for in-car internet use.

The vote for "Off-Roader of the Year" ranks among the most important and traditional reader polls in Germany. Going back as far as 1982, readers of Off Road magazine have been invited annually to choose their favourite all-wheel-drive vehicles on the German car market. This year the selection was made from a line-up of 101 models in eight categories.