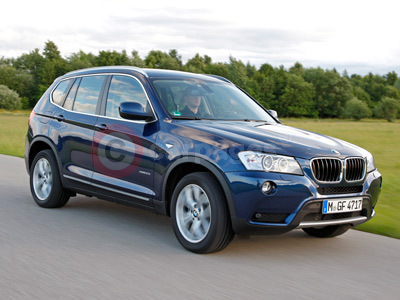 The BMW X3 will have two new models added to the range, the BMW X3 xDrive20i and xDrive35d, which will be available with a choice of three petrol and three diesel engines from Autumn 2011, with an output range from 135kW/184hp to 230kW/313hp. BMW EfficientDynamic technology features include Auto Start-Stop, which can be combined with the six speed manual or eight speed automatic transmission.

The BMW X3 Drive20i will be available as the entry-level petrol unit. It features a newly developed 2 litre four cylinder unit with BMWTwinPower Turbo technology which includes a turbocharging system which is based on the twin-scroll principle along with High Precision Injection direct petrol injection, Double-Vanos variable camshaft control and VALVETRONIC variable valve control.

The engine produces a peak output of 184hp at 4800rom with maximum torque of 270 Nm at 1250rpm. As standard, the BMW X3 xDrive20i features a six speed manual gearbox with optional eight speed automatic transmission.

From autumn 2011, the new BMW X3 xDrive35d will features the 3 litre six cylinder in-line unit with BMW TwinPower Turbo technology, producing peak output of 230kW/313hp at 4400rpm and a maximum torque of 630Nm between 1500 to 2500rpm. As standard, the BMW X3 xDrive35d features eight speed automatic transmission with Auto Start-Stop.

For autumn 2011, standard and optional equipment ranges have been boosted. The Auto Hold function will be augmented by the automatic release of the electromechanical parking brake, the BMW X3 is the only model in its class to offer the option of Head-Up Display and in-car internet access. Real-Time Traffic Information will also be made available for the BMW X3, providing accurate and up to the minute details on congestion and traffic situations for motorways, country roads and selected city routes. Trim elements on the instrument panel can now be specified in High gloss black.