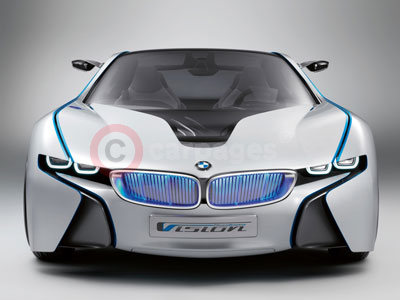 The BMW Vision EfficientDynamics is BMW's most innovative concept car ever and sets a new performance car agenda. Its unique powertrain, ground-breaking performance potential and exo-skeletal style bodywork crafted from aerodynamic knowledge gained in Formula One set it apart from anything previously seen.

Powered by a three-cylinder turbo diesel engine and two electric motors, the BMW Vision EfficientDynamics is capable of BMW M3 performance but with a fraction of that model's CO2 emissions and far greater fuel economy. The striking concept car is showcased with a powertrain producing an anticipated 356hp and 800Nm of torque for true supercar performance. However, the vehicle has been designed to be capable of recording 75.1mpg on the combined cycle and CO2 emissions of 99g/km.

The vehicle's impressive performance figures improve further when it runs solely in hybrid mode. When taking the sources of electrical energy generation into account the CO2 emissions of the BMW Vision EfficientDynamics drop to a staggering 51g/km.

The BMW Vision EfficientDynamics highlights a number of technologies that will appear on BMWs of the near future. BMW's Air Curtain system that channels air through a front valance with the air exiting ahead of the front wheel is fitted. The Air Curtain system's exiting air flow effectively deflects air from entering the wheel arch and causing turbulence thus improving all round performance.

The 1.5-litre three-cylinder turbocharged diesel engine is another feature that indicates production potential. In isolation this new engine is capable of recording peak power of 163hp, a new record in terms of output per litre at 109hp, and a peak torque of 290Nm.

The hybrid drivetrain features two electric motors - one on each axle. At lower speeds just the electric drive mode functions. The rear axle motor can produce up to 38kW of power and 290Nm of torque, while the second axle motor is capable of 60kW and 220Nm of torque. However, an overboost function allows the driver to top this up to 84kW for a 30 second boost and 104kW for a 10 second power enhancer. When taking all three power sources into account these figures equate to a car that records a peak power of 356hp and torque of 800Nm. Power is transmitted to the road via an enhanced version of BMW's existing seven-speed Double Clutch Transmission.

The BMW Vision EfficientDynamics has a range of 31 miles when driving only on electric mode. Combined with the three-cylinder diesel engine this extends to a total possible distance between fill-ups and charges of 431 miles. Using a conventional domestic power source at 220 V would result in the vehicle being fully recharged after 2.5 hours. Access to a slightly more powerful 380 V sees the charge time drop to 44 minutes.

Inside the BMW Vision, and the 3D Head-up Display is another feature that highlights at possible production car capability as does a new incarnation of iDrive with a touchpad screen. The vehicle's 4.6 metre length, 1.9 metre width and 1.24 metre height permit a 2+2 configuration that makes this supercar a practical form of transport. With the rear seats folded the BMW Vision EfficientDynamics even has room for two sets of golf clubs that can be stowed in the 150-litre luggage area.

The BMW Vision EfficientDynamics is the centrepiece of the BMW stand at the Frankfurt Motor Show.

If in doubt check with your local BMW dealer as car prices and technical data will have changed since 2009.