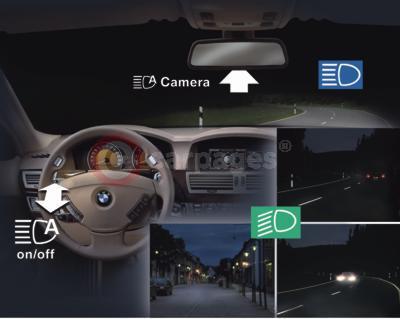 Two groundbreaking safety innovations will be available on BMW models this autumn when Night Vision and High-Beam Assistant are offered for the first time.

Night Vision uses a special thermal imaging camera to ‘illuminate’ pedestrians, animals or any objects emitting heat up to 300 metres ahead of the car. Infrared technology generates a clear image of the road ahead on the iDrive screen and the system is particularly effective on long stretches of unlit road or motorway. Bi-xenon headlamps already illuminate the road 150 metres ahead, but Night Vision offers the driver a significantly longer range of vision. The result? All round better awareness of the road ahead and safer driving.

Road safety levels can be further increased by the use of High-Beam Assistant - a system that automatically sets the Bi-xenon headlights to the optimum range and brightness depending on other traffic movements. A sensor at the front of the car detects any oncoming exterior light source, allowing the car to automatically switch between high and low beam for the best level of illumination. For example, the car’s headlights will automatically dip when it detects street lamps (on entering built-up areas) or even an oncoming cyclist, then return to full beam when no light source is detectable.

Both safety innovations have been introduced following widespread research showing the inherent dangers posed by poorly lit roads or busy highways. German road safety research has shown that approximately 50 per cent of serious accidents are caused as a result of the driver not having enough information about the road ahead to take avoiding action. The same research has also shown that, while 75 per cent of all driving is done during daylight hours, more than 50 per cent of all fatal accidents happen during the hours of darkness. Similar accident figures have been found in US studies.

When looking at developing BMW’s Night Vision system, engineers considered two types of imaging cameras on the market - Near Infrared (NIR) and Far Infrared (FIR). NIR uses a source of infrared light and an infrared camera mounted on the front of the car. Any infrared light reflected from objects is collected by the camera and then processed into an on-screen image. FIR on the other hand uses a thermal imaging camera to directly register heat radiated from objects with an image then being displayed on-screen.

After a process of evaluation FIR was considered superior. Since there was no need for another light source to be projected from the car fewer components are used. FIR also had a greater area of coverage and, unlike NIR, couldn’t be confused by the lights of oncoming vehicles, traffic lights or road signs with their strong reflective qualities.

Night Vision can be activated by a button alongside the headlight switch. An option in the iDrive menu allows the driver to select brightness and contrast while choosing between a full screen or split screen display.

High-Beam Assistant was developed after research showed that high beam headlights could, and arguably should, be used in approximately 75 per cent more occasions than they currently are. Further studies highlighted that drivers who do switch to high beam often fail to deactivate it in time and, consequently, dazzle other road users. The solution is High-Beam Assistant, a system that uses a light-seeking camera located in the rear view mirror housing to monitor the road for up to 1,000 metres ahead.

Pricing for the High-Beam Assistant on the BMW 5, 6 and 7 Series have been confirmed at £95.00 but the cost for Night Vision, which is due to be launched in late 2005, is yet to be confirmed.

Note - Xenon main beam headlights first appeared on BMW cars in 1991, and for both low and high beam in 2001 (Bi-Xenon). This was followed by Adaptive Headlights, which swivel to illuminate the road when cornering, in 2003. High-Beam Assistant represents the next stage in lighting safety.