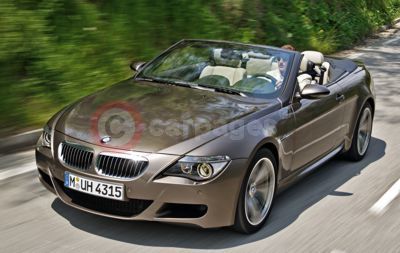 BMW’s fastest ever soft-top, the BMW M6 Convertible, will make its debut at the British International Motor Show (July 18 – 30). Powered by the award-winning 5.0-litre V10 engine and using a host of F1-derived technology, the BMW M6 Convertible combines all the performance of the M6 Coupé but with the added luxury of open-air motoring.

The M6 Convertible goes on sale in the UK in September 2006. It becomes the first ever BMW to make a British Motor Show debut and it is the first time a BMW M version of a 6 Series Convertible has been built.

The new open-top M6 uses BMW’s 4,999cc V10 powerplant developing 507hp. This powers the car from 0-62mph in 4.8 seconds before going on to an electronically limited top speed of 155mph. Unchecked, the car could continue to a top speed approaching 200mph. Its sheer performance, alongside the engine’s technological advancements, are just two of the reasons the worldwide judging panel of the International Engine of the Year voted the M6’s 5.0-litre V10 engine the world’s best for the second year in succession - a new landmark in the history of the awards.

Drive is via a seven-speed Sequential Manual Gearbox with Drivelogic - the world’s first such transmission that has already seen service in the BMW M5 and the M6 Coupé. The BMW M6 Convertible’s Drivelogic function offers the driver a choice of 11 different gear change options - five in auto mode and six in manual mode - each offering a different speed of gear shift. In its fastest setting, the driver of an M6 Convertible can make gear changes in just 50 milliseconds - far faster than can be achieved by an experienced driver using a conventional manual gearbox.

Even with these high levels of performance, the new M6 Convertible achieves a fuel consumption figure of 18.6mpg on the combined cycle and a CO 2 emissions figure of 366g/km.

BMW’s renowned Variable M Differential and BMW M’s version of the Dynamic Stability Control (DSC) system provide the highest levels of traction and the ultimate dynamic capability. The Variable M Differential permits up to 100 per cent of drive forces to be fed to one rear wheel to optimise traction while the DSC system, in its optimum M Dynamic Mode, permits a greater degree of wheel slip for even higher levels of performance.

To ensure a refined interior, the BMW M6 Convertible comes with a triple-layered hood for the ultimate in noise and heat insulation and, like other 6 Series Convertible models, also incorporates a Fin Structure roof for a Coupé-like silhouette. This triple-layered hood contains a middle component of polyurethane (PUR) foam. The resulting fabric sandwich gives the car near identical standards of acoustics and thermal insulation as a fixed-head coupé.

Intelligent soft-top design also allows a large luggage compartment. Three hundred litres of capacity is available with the roof down. With the roof closed and the flexible soft-top storage compartment folded up, luggage capacity expands to an even more generous 350 litres.

In line with BMW M’s ethos of marrying high levels of naturally-aspirated engine output with the intelligent use of lightweight materials, the M6 Convertible showcases several special technologies. The front wings are made of Thermoplastic, a material lighter than aluminium but also flexible enough to allow for minor bumps, while the front and rear bumpers are constructed from carbon-fibre for durability. The rear bootlid and soft-top hood cover are made from Sheet Moulding Compound, another flexible lightweight material. The remainder of the bodywork is a mix of steel and aluminium while many of the car’s mechanical components are also made from weight-saving aluminium. These materials combine to ensure that the M6 Convertible retains BMW’s renowned 50:50 weight distribution for optimum balance and agility.

To complete the sporting design of the M6 Convertible, it features bespoke 19-inch double spoke light alloy wheels shod with low profile performance tyres - 255/40 R19 at the front with 285/35 R19 at the rear. Large vented and drilled high performance brakes deliver excellent stopping power. The front discs measure 374mm in diameter while the rears are 370mm.

Prices for the M6 Convertible and full specification details will be announced nearer the launch date.