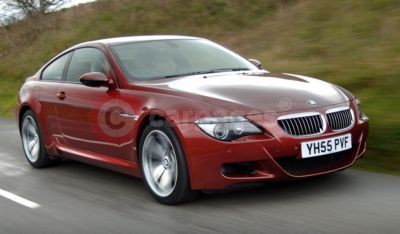 With 2005 likely to be their fifth record year in succession for passenger car sales in the UK and with your two most desirable models, the M5 Saloon and new M6 Coupe, already sold out for 2006, BMW (UK) Ltd should feel pleased with their performance, especially as overall the UK new car market is shrinking.

Launching the new M6 lightweight two-door coupe to the media this week, Jim O’Donnell, managing director of BMW (UK) Ltd said, "The M badge is a key special ingredient in our achievements, special cars like the M6 put the M in BMW."

"The M5, and now the M6, are fantastically aspirational models within our range. They are an inspiration for true car enthusiasts and continue to set the benchmark for performance versions of standard road cars. For many of our customers, the M cars are the reason for joining the BMW family, whether they own a new M6 or our 1 Series sports hatch, where the company’s engineering principles, honed at the M division, clearly filter down through the range."

"We expect UK owners to be predominantly male, businessmen or entrepreneurs and as the coupe offers high performance and practicality, the car will be used day-to-day rather than as a weekend toy. We think owners will have at least two other cars in their garage and will be slightly younger than the driver of a standard 6 Series Coupe (mid-40s compared to late-40s)."

He added; "As with the M5 we launched in May this year, we are working hard to ensure that prospectors do not benefit at the expense of genuine customers on the waiting list."

However the ‘small ads’ of a quality broadsheet Sunday newspaper a week ago contained details of four M6s being offered for sale.

Using technology, engine electronics and materials derived from its F1 programme, the BMW M6 with its 507bhp, V10, 5.0-litre normally aspirated petrol engine, is capable of 204mph and a 0-62mph time of 4.6 seconds, if the electronic restrictor is removed. In restricted mode top speed is limited to 155mph and 0-62mph takes 5.6 seconds.

The new seven-speed sequential gearbox for the M5 and M6 is designed to provide gearchanges in just 50 milliseconds and to accommodate the engine’s 520Nm or torque. The drive is transmitted to the rear wheels via a new torque-sensing differential. This automatically provides between zero and 100 per cent of the power to the wheel with most adhesion to the road surface at any given time. As with the M5, the M6 is also fitted with a F1 style launch control to give maximum traction from standstill for use on a circuit at track and club days.

BMW claim the M6 will on average return 19mpg

Performance is maximised still further by reducing the weight of the coupe and BMW have given the M6 an aluminium front end to the chassis, aluminium bonnet and doors, plastic wings and bootlid as well as carbon fibre roof section and bumper supports. The roof section remains unpainted to enhance the performance image of the M6.

Lee Connolly said that BMW with the M6 had majored on developing lightweight panel technology so that it can be integrated into the bodyshell production line process for future models.

As a result of the weight saving the M6 is 45KG lighter than its mechanically identical M5 saloon.

Connolly also confirmed that BMW are currently running experimental versions of an M6 Convertible and M5 Touring (estate) but that no decision has been made as to the viability of putting these vehicles into production.

BMW M6 Images may not be UK specification cars. Colours and exterior and/or interior elements may differ from actual models.