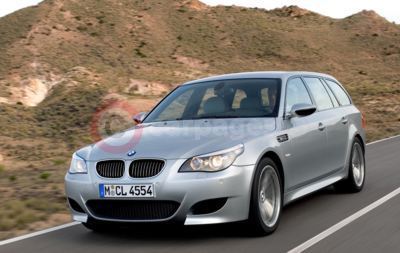 BMW has announced details of the revised 5 Series Saloon and Touring range, topped off by the new BMW M5 Touring.  From its launch in 2003, the E60 5 Series delivered year-on-year sales records and received numerous accolades.  The new 5 Series is set to build on that success with more performance, efficiency, practicality and owner appeal.  Offering new engine technology to increase performance yet improve economy by up to 25 per cent, and class-leading comfort-focused equipment such as Lane Departure Warning System, the new 5 Series is set to remain the benchmark Executive car.

With the previous M5 Touring (E34) only available in left-hand drive, the arrival of the new M5 Touring marks the first time the high-performance estate has been offered to British customers.  Powered by the same normally aspirated 5.0-litre V-10 cylinder engine as its Saloon counterpart, the new M5 Touring redlines at 8,250rpm.  507hp and 520Nm of torque propel the car from zero to 62mph in 4.8 seconds (only 0.1 seconds slower than the Saloon). Without the 155mph electronic limiter the new M5 Touring would be capable of achieving 200mph while still transporting the largest of loads.

This balance of ultimate practicality and performance is summed up by Lee Connolly, BMW UK's Product Manager for the new M5 Touring: "The M5 Touring will be the perfect car for delivering supercar owners' luggage to their holiday homes in France or Spain.  Usefully, their luggage will arrive before they do!"

These levels of performance are in part made possible by the world's first seven-speed Sequential Manual Gearbox with Drivelogic in a production car.  The gearbox features eleven different change patterns to offer the driver a personally-tuned driving experience - six settings vary speed and response of gear change in a manual mode and there are five automatic modes.  A Launch Control function delivers the fastest possible acceleration from standstill.