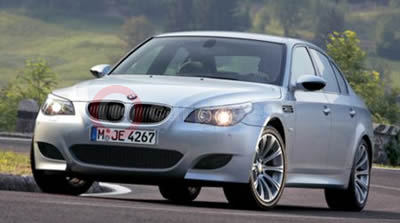 BMW (UK) has produced an atmospheric on-line animation to celebrate the launch of the new M5 in May. ‘Roadmonster’ can be viewed at www.roadmonster.co.uk and features an M5 evading all that a possessed highway can throw at it. Suzanne Gray, BMW (UK) Advertising Manager, summed up the film. "M5 is such a legendary name that we wanted to take the opportunity to highlight the new model’s capabilities. This unique piece of film demonstrates its staggering performance in an appropriately dynamic way that is, unfortunately, not possible through traditional media such as television."

‘Roadmonster’ also includes a link through to www.bmwfilms.com , BMW’s critically acclaimed series of short films that featured Madonna, Clive Owen and an E39 M5 in a Guy Ritchie directed film, Star. The world’s most famous female pop star plays a clichéd ‘difficult’ celebrity, but it is the M5, with Owen at the wheel, that is the real star.

BMW M5 Images may not be UK specification cars. Colours and exterior and/or interior elements may differ from actual models.