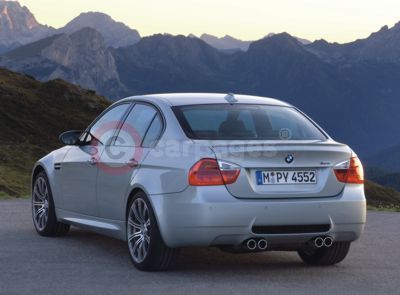 Hot on the heels of the arrival of a new BMW M3 Coupe , BMW UK has announced details of the four-door M3 Saloon. While four generations of M3 have been built, this is only the second time an M3 Saloon has been offered. Thirteen years after the launch of the original M3 Saloon, the new car offers the same levels of scintillating performance as the latest Coupé. With the added practicality of the four-door bodyshell, the new M3 Saloon will appeal to an even broader audience.

Like the Coupé, the engine in the new M3 Saloon develops 420hp at 8,300rpm and 400Nm of torque at 3,900rpm. The 3,999cc V8-power unit red-lines at 8,400rpm but to highlight the real-world driving flexibility of the engine, 85 per cent of torque is available over an engine range of 6,500rpm. Power is transferred to the road by BMW M’s six-speed manual gearbox and variable M differential. This conveys up to 100 per cent of available power to the wheel with most grip.

The M3 Saloon completes the sprint from zero to 62mph in 4.9 seconds, only 0.1 seconds slower than the Coupé, before going onto a limited top speep of 155mph. BMW’s EfficientDynamics programme, however, ensures that these supercar levels of performance do not compromise economy with the car delivering 22.8mpg on the combined cycle.

BMW EfficientDynamics, even in M cars

In common with all new BMW models launched in 2007, the new M3 Saloon features Brake Energy Regeneration. This technology uses an Intelligent Alternator Control and Absorbent Glass Mat battery to recognise when the engine is on over-run and activates the alternator to charge the battery with what would previously have been wasted energy.

Another aspect of BMW’s EfficientDynamics programme is lightweight technology. Although not featuring the carbon-fibre roof panel from the Coupé, it does use other lightweight, but high-strength, materials. Using a light-alloy engine block manufactured alongside F1 engines at BMW’s foundry at Landshut, Germany, the new V8 powerplant weighs a mere 202kgs. To put this achievement into context, this is 15kgs less than the six-cylinder engine in the previous-generation M3.

To further highlight the weight advantages, the crankshaft in the new engine is made from one complete forging and weighs only 20kgs. Additionally, the front axle components are built entirely from aluminium. Even the five-link rear axle, normally constructed from high-strength steel, has aluminium components to save weight.

Like the M3 Coupé, the Saloon variant also features an M Drive Manager that brings together numerous personalised functions of the car. The optional Electronic Damper Control (Normal, Comfort and Sport), three DSC+ traction control settings and three specific engine control maps, plus the response rate of the Servotronic power steering can be controlled with one button on the steering wheel. Once the desired settings are created in the iDrive menu, part of the standard Professional navigation system, one push of the MDrive button transforms the M3 from a car suitable to collect the kids from school in into supercar-beater.

BMW M’s philosophy of redesigning the ‘standard’ car from the ground up is showcased well in the new M3 Saloon. Although visually similar to the 3 Series Saloon, almost all the bodyshell parts are different with the emphasis on the sporting dynamics of the car. So much so that the M3 Saloon features the same, sleek front end design from the Coupé. This includes the lowered, sportier headlamp design and striking power dome in the bonnet. Primarily, the design of the front of the car is created by the need for significant volumes of air for the induction system. As a result, the M3 does without front fog lamps, whilst three large air ducts in the front lower valance keep the engine breathing.

Like the Coupé, the new M3 Saloon features 18-inch Dark Graphite double-spoke light-alloy wheels as standard, with a forged and polished 19-inch wheel available as an option. Another BMW M trait, the side gill in the front wing, has been elongated for the Saloon, mirroring the design from the M5. Also carried-over from the two-door are the aerodynamically-effective door mirrors.

Details about the launch date and pricing of the M3 Saloon will be announced in the future.